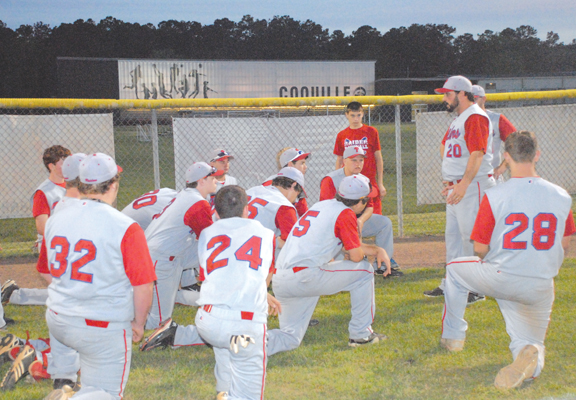 Pearl River jumped out to a 2-0 lead in the first inning, but Pine answered with a run in the first and second to tie it 2-2.

Jamie Adcox hit a sacrifice fly in the first, plating Hunter Cooper to make it 2-1 before Kendall Watson reached on an error, scoring Danny Smith with the tying run in the second.

Pearl River went back in front 3-2 in the third, but Pine continued to battle back and evened the score 3-3 in the fifth with Trevor Stuart’s RBI single, which plated Cooper.

Pearl River went back in front 4-3 in the sixth and never looked back to claim the victory.

Cooper singled twice, while Stuart had the RBI single and Adcox posted the sacrifice fly. Trey Cooper, Cody Cooper, Jordan Phelps and Jonathan Lyons all recorded a hit for Pine.

Evan Vasalech was the losing pitcher.

Pine is 9-16 this season, but the main struggle has been in close games. The Raiders are 1-6 in contests decided by three runs or fewer and 0-5 in one-run games.

In Thursday’s District 8-2A finale, the Raiders suffered a 5-1 loss to Northlake Christian School on the road.

The game featured just one big inning, as NCS broke a scoreless game with four runs in the second.

Pine did a good job defensively, playing an errorless game.

Danny Smith singled and doubled, while Jamie Adcox singled with an RBI. Trey Cooper doubled and scored the team’s lone run, and Rion Terrell singled for the Raiders. Terrell was the losing pitcher.

NCS finished with a 4-2 record in league play and finished as the tri-district champion with Pope John Paul II and Archbishop Hannan.