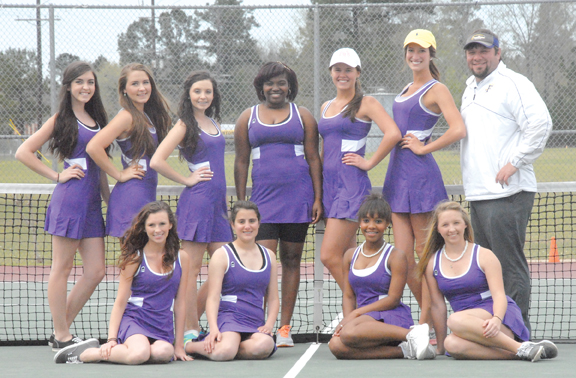 Franklinton’s girls tennis team completed an undefeated District 9-4A season Tuesday with a 4-1 home win over Salmen and captured the league title with a 3-0 record.

The team finished the regular season with a 6-1 overall record. In the last three years, the group has gone 21-2 overall (.913 winning percentage) and 9-0 in league play.

Franklinton coach Adam Brumfield said it always feels good to win district, and they are really excited about being the district champion three years in a row.

“Our girls program hit the ground running,” Brumfield said. “It started six years ago with a team of four who had never picked up a tennis racquet, but they worked hard and were determined to compete with other programs. Eventually when they were seniors they won a district championship.”

Brumfield said the team has continued to work hard and has been committed to carrying on the tradition.

“I am proud of those girls and what they have accomplished,” he said.

Brumfield said it has taken a little longer to get the boys at FHS as interested in tennis, but he said he can see an interest starting to spark his young boys team, which has improved throughout this season.

“I am very proud of those guys,” he said.

On Tuesday, FHS’ Ashton Keaton was victorious over Lindsey Nguyen 7-5, 4-6, 10-7 as the two needed a tiebreaker set to decide the contest.

“Ashton Keaton is a sophomore,” Brumfield said. “She won her super tiebreaker 10-7 to give the girls the go-ahead match to win the district title. Ashton has had a challenging season. She went from being on my third line doubles to being my number one singles player, and her hard work and determination paid off by giving us a crucial win for the district championship.”

The boys lost 4-1 Tuesday and finished with a 3-4 overall record and 1-2 in district.

Regionals are next week in Baton Rouge, but Brumfield said with school closed for spring break and several family trips having been planned in advance, the team decided not to participate.