Pine struggles in the clutch in loss to Archbishop Hannan 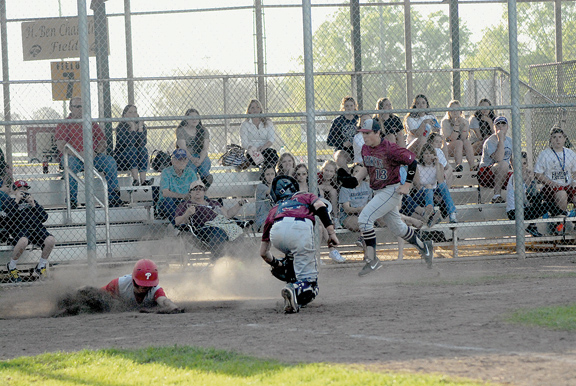 Pine lost an 8-3 lead and came up a run short, leaving the potential tying and go-ahead runs on base in the seventh inning during a 9-8 loss to Archbishop Hannan in District 8-2A play Wednesday at the Coquille Sports Complex in Covington.

The teams were tied 3-3 after two innings when the Raiders (8-10, 0-2) seemed to take command with five runs in the third.

Cody Cooper, who went 2-for-3 with two runs scored, led off with an infield single to shortstop. He took second on a throwing error, as a pickoff throw was high and out of play. Seth Brown moved Cooper to third with a groundout. Following a walk to Jordan Phelps and steal by courtesy runner Connor Holmes, Danny Smith coaxed a walk to fill the bases. Jamie Adcox was next. The Raiders ran the suicide squeeze and Adcox couldn’t have done the job any better. He put down a perfect bunt just past the pitcher for an RBI bunt single, plating Cooper, but a throwing error allowed Holmes to score and it was 5-3. Connor Ard reached on a throwing error. Smith would’ve scored anyway, but the miscue allowed Adcox to get home and it was 7-3. Trevor Stuart then made it 8-3 with an RBI double to left, plating Ard.

Pine seemed to be in control.

Pine coach Blake Dillon said leaving too many runners on base has been their main problem all season.

Dillon said it’s something they’re building and trying to work on.

“Once we get that, we’re going to be a helluva team, but right now, it’s like I’m telling the kids, we’re trying to climb the mountain. We’re on the top step, we’ve got to find a way to get over that last step and get on top of the mountain,” Dillon said.

Not being able to get the insurance runs proved costly for Pine, as Hannan chipped its way back in.

The Hawks scored a run in each the third and fourth. With one out, Bruce DiMartino was hit and then forced out at second on a grounder by Nick Lagalante, who scored on Ian Distafano’s sacrifice fly to make it 8-4.

In the fifth, Dale St. John was hit to lead off and scored when Andrew Barre drew an RBI walk, but Pine still led 8-5.

Hannan went in front in the fifth. Eli Murphy walked with one out before Quinn Heinold reached on a fielder’s choice, as courtesy runner Alvin Perrault was safe at second on a throwing error. After the second out, Brent Powell singled and then DiMartino hit a two-run double plating Perrault and Heinold and it was 8-7. Lagalante then doubled in Powell and DiMartino, giving the Hawks a 9-8 advantage through five.

Neither team scored in the sixth, keeping it 9-8 and Pine had a golden opportunity to go back in front in the seventh. Adcox singled and Ard was hit. Stuart moved Adcox to third and Ard to second with a sacrifice bunt. The Raiders had the potential tying and go-ahead runs on base, but a pop out to short and groundout to the pitcher left them stranded there, as the Raiders came up a run short.

Phelps walked, got hit and drove in a run. Smith walked three times, once intentionally, while Adcox tallied two hits and an RBI. Ard singled, drove in a run and got hit, while Stuart posted an RBI double and Nick Adcox had an RBI groundout and was hit.

It was the second time in two days the teams met. Hannan won Tuesday’s district opener 8-6 in 11 innings.

The clubs went to extra innings tied 2-2. Each team scored a run in the eighth before Hannan outscored Pine 5-3 in the 11th for the victory.

Hunter Cooper had a big game at the plate, going 4-for-5 with a double and an RBI. Nick Adcox tallied two singles and an RBI, while Phelps singled twice. Stuart doubled and drove in a run, while Ard singled. Brown and Cody Cooper both recorded an RBI.

Brown was the losing pitcher.