Pine scores 20 runs in the fourth to break open game against Mt. Hermon 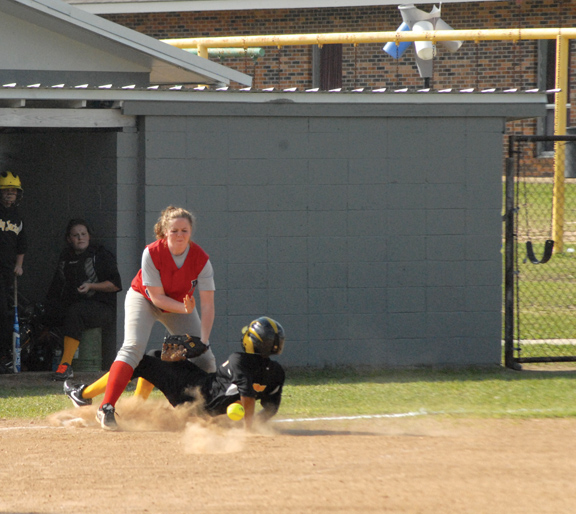 Pine turned a 6-3 lead through three innings into a 26-3 advantage going into the bottom of the fourth and defeated Mt. Hermon 26-7 in a four-inning District 8-2A road contest Tuesday.

Pine led 6-3 after three, but really got things rolling in the fourth by scoring 20 runs. The Lady Raiders pounded out 13 hits, while taking advantage of six errors and sending 25 hitters to the plate.

The inning began with Rachael Williams and Hannah Jones both reaching on errors. Williams scored on Paris Kennedy’s RBI single to make it 7-3 before Jones crossed on Alyssa Wallace’s infield single. Megan Graham was hit to load the bases and Kayla Temples added a run with an RBI groundout, sending Kennedy home for a 9-3 advantage. Wallace scored the 10th run on a wild pitch and Dakota Thomas’s RBI single sent courtesy runner Lacie Fletcher home had Pine up 11-3. Following a single to left by Abby Whaley, Sierra Miley posted a two-run double down the left-field line, scoring Thomas and Whaley for a 13-3 advantage. Williams walked and then Jacobs singled home Miley before Kennedy doubled in Williams and Jacobs. Pine was ahead 16-3 and there was still just one out. Wallace continued to provide the Lady Raiders with base runners by getting hit and then Graham hit an RBI single up the middle to make it 17-3. Temples posted a single, but an error allowed a run to cross and it was 18-3. Thomas continued the hit parade with a run-scoring single, but an error allowed a second run to cross and Pine was ahead 20-3. Whaley walked before Miley singled off of the pitcher for an RBI and then Williams hit a two-run single and it was 23-3. Jacobs reached on an error, Kennedy was hit to load the bases and then Wallace picked up an RBI by getting hit. Following the second out, Pine capped off the scoring with Temples logging a two-run single for a 26-3 lead.

Kennedy reached base four times with two singles, three RBI, she got hit, reached on an error and scored four runs.

Pine coach Tammy Voth said Kennedy is the wheels of the team and said she can steal when she reaches.

“She’s really fast, so she does a good job for me,” Voth said.

Mt. Hermon coach Henry Crawford said Pine did a good job of putting the bat on the ball in the fourth.

“They just put the bat on the ball real well in spots that we weren’t,” Crawford said. “We were playing a little deeper than we should in some spots. They were able to bloop it over the infield and shoot the gaps.”

For Mt. Hermon, Hart and Alyssa Woodard both scored a run, while Hughes had two singles and two RBIs. Alyssa Barber walked twice, while Karla Martin scored a run. Martin had a run-scoring single.