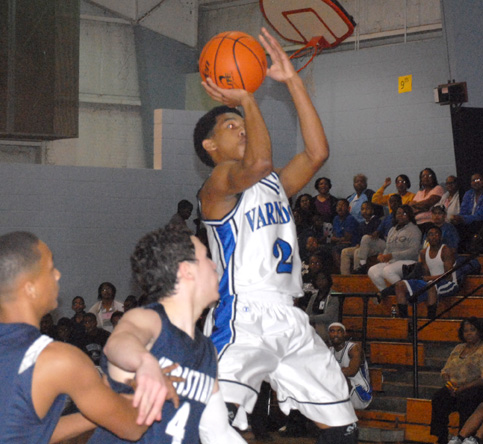 Varnado suffered a 60-41 District 6-1A loss to Christian Life Academy at home Tuesday.

It was the final regular season game.

Varnado (16-10, 2-5) struggled on the offensive end early on. Its first three possessions resulted in three missed shots and a turnover.

Varnado trimmed a point off the deficit, getting it to 14-7, before Allen Alexander hit a 3-pointer with 22 seconds left to make it 14-10.

Alexander, who scored seven in the game, tallied another field goal on Varnado’s first possession of the second quarter to pull the Wildcats within two, forcing the Crusaders to call timeout with 7:30 remaining.

Sam Williams was good for two; Johnathan Stove, a University of Louisiana at Lafayette basketball signee, nailed two free throws to make it 18-12 at the 5:17 mark; R.J. Hertzog split from the line and Williams hit Malik Harrison with a baseball pass for a layup and a 21-12 lead with 4:34 to go.

Christian Life upped it to 28-16 with 56 seconds on the clock, but VHS’ Preston Spikes, who scored four points, hit two free throws. The Wildcats trailed 28-18 at the break.

Hertzog added a layup to the Crusaders’ lead with 7:04 showing in the third quarter to make it 30-18.

VHS trimmed it to 30-20 on a follow-up shot after an offensive rebound by Keith Allen, but Mitch Wilkerson made it 33-20 with a right corner 3-pointer with 6:18 left.

The lead was between nine and 14 points until the final buzzer.

With Christian Life leading 44-30, Stove attempted a shot from half court. The shot was off, but Varnado was whistled for a foul, sending Stove to the line for three free throws. VHS coach Brad Oestriecher argued the call and was assessed a technical, and just seconds later he was ejected after a second technical foul.

Christian Life had seven free throws coming its way and converted all of them. Stove hit the three from the foul, then Harrison stepped to the line and knocked down all four technical foul shots to give Christian Life a 51-30 lead through three.

Christian Life’s lead never dropped below 19 during the fourth quarter.

Despite the loss, Oestriecher was proud of his team’s effort.

“My kids played their tails off,” Oestriecher said. “They gave maximum effort all night. Sometimes the ball just doesn’t fall for you.”

Allen led the Wildcats with 12 points, while Delrick Abrams finished with six and Jefferson had five. Dominique Harry posted four and Nick Darden had three.