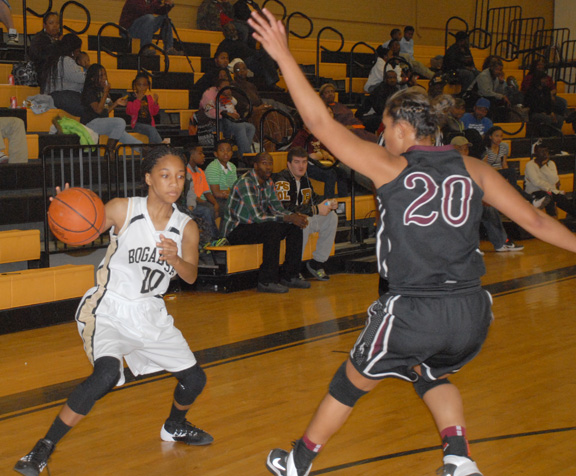 Bogalusa got down by double digits early on and was never able to trim the deficit under eight in a 73-38 loss to Albany in District 8-3A play Friday at BHS.

The Lady Jacks (13-12, 4-3 at press time) had trouble inside against Albany’s Danielle Brown, who scored 20 points and hit six of 16 from the free throw line.

“Our strategy was to go at (Brown) and get foul trouble on her, but we took too many outside shots. We basically shot ourselves out of it,” Bogalusa coach Ken Martin said.

Instead, Brown was a force down low, scoring 14 points in the first half. Teammate MeMe Sykes finished with 22 points.

The contest was close early on, but Albany (24-6, 8-1) began to take control at the five-minute mark of the first quarter.

Nylijah Mingo, who scored 10 points, gave Bogalusa its final lead 6-4 when she knocked down a 3-pointer from the top of the key.

Darilyn Rogers answered with a 2-pointer for Albany, which began an 18-1 run.

Lauren Thompson found Brown, who hit the shot, got fouled, but missed the free throw. Albany had an 8-6 lead with 4:18 left.

Brown then pulled down an offensive rebound and hit the put back. Sykes made two free throws before Brown hit one of two after another offensive board, then Rogers split from the line to make it 14-6.

Bogalusa’s JaMya Young, who led the Lady Jacks with 11 points, was good on one of two from the line to make it 14-7 with 1:44 remaining.

Brown then got inside for two more before Thompson was good on two free throws and then hit a shot for a 20-7 advantage. Thompson then hit a pull-up jumper with 34 seconds left.

Mingo ended the run when she drove baseline for a bucket, and Albany led 22-9 after one.

Bogalusa hung in for the first part of the second period. After getting down 24-12 with 6:56 on the clock, Shanekqua Mingo hit a follow up shot before Erin Crawford was good for two to make it 24-16 with 6:07 showing.

Albany responded by breaking the game open with 10 unanswered points and led 34-16 with 3:24 left in the opening half.

Bogalusa answered the run with four in a row, as D’sha Rankins drove for two and Young came up with a steal, hit the layup and was fouled, but she couldn’t convert the 3-point play. It was 34-20 at the 2:28 mark.

Albany scored seven of the final eight points to lead 41-21 by halftime.

Bogalusa never got the deficit below 20 in the second half.

Also scoring for Bogalusa were Amia Peters with five, Jasmine May four, Crawford three, Rankins and Shanekqua Mingo two each and Diamond Martin one.