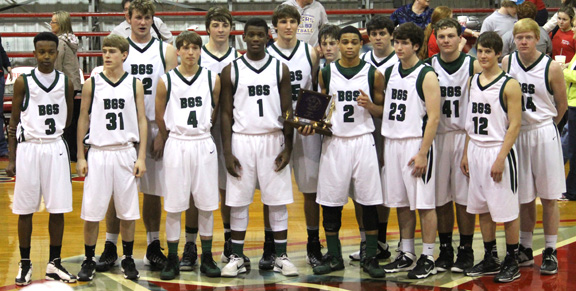 The Bucs beat Ben’s Ford, 52-40, to win the tournament, and the girls beat Central Private, 59-14, for the championship.

In Friday’s second game, Ben’s Ford Christian School was victorious over Centreville, 54-47, to set up a Washington Parish final.

Bowling Green’s Robertson had another big game in the finals, scoring 25 points while grabbing 16 rebounds, seven on the offensive end, in a 52-40 finals’ victory.

McCain recorded 14 points, while Patrick Roublow finished with nine. Trent Ball and Bryan Ottinger added two each for the Bucs.

Johnson had 11 points to lead Ben’s Ford scoring, while Daniel Pittman had 10, Peters seven and Robbins and Destin Pittman six each.

Ashley Foret led the Lady Buccaneers (30-2) with 11 points. Melissa Crowe and Regan Moody both had 10.

The Lady Bucs’ victory put them in the title game against Central Private Saturday, where they were victorious, 59-14.

Kristina Jarrell scored 24 points in the championship game. She was nine of 15 from the field, including four of six from beyond the arc.

The top four teams move on to the state tournament.

Ben’s Ford opened South State play after press time yesterday against Brookhaven Academy. The winner of that game will face the host school or Central Hinds.

Bowing Green’s boys tip off today at 5:15 p.m. against Hartfield Academy. The winner will play either Adams County Christian or Wayne Academy, who play at 7:45 tonight.