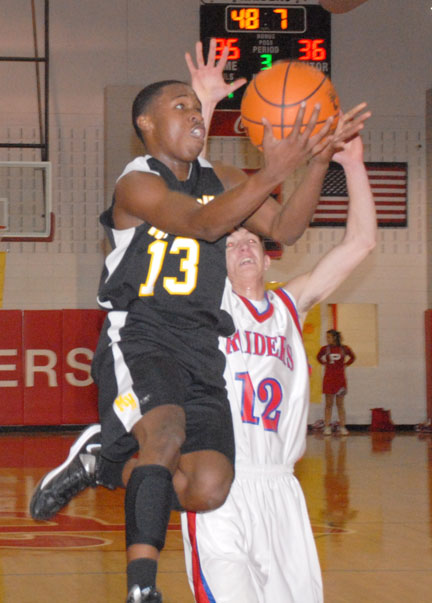 Pine scored the final nine points of Friday’s District 8-2A home game against Mt. Hermon en route to a 54-50 win, its fourth straight.

Pine’s Hunter Cooper, who finished with 13, responded by hitting a 3-pointer. Ty Galloway tied the game when he was fouled on a jumper. He missed the free throw, but it was 50-50 with 2:19 left.

The Raiders then won the game with defense and free throws down the stretch. The Raiders hit four of six from the line in the final minute.

“It was pretty tough,” Cooper said. “I could’ve, should’ve made the two, but I made one of the two, and it was good enough to give us the lead.”

After Mt. Hermon (5-10, 1-2 at press time) called timeout with 24.4 seconds left, Jessie Pouncey drove to the bucket. Pine’s Cooper and Jordan Phelps formed a defensive wall in the lane, and Pouncey was whistled for a charge.

Mt. Hermon missed a shot from inside the 3-point line, and Pine got the ball on a save to Hunter Cooper, who was fouled with 1.3 seconds left. He hit one of two from the free throw line for the 54-50 final.

Hunter Cooper, who totaled 13, said the Raiders are getting their confidence up that they can finish games.

“Even though we were down in the fourth quarter, we ended up having a few buckets back to back. We picked up and got the lead,” he said.

Despite the loss, Mt. Hermon sophomore Corterio Williams put on a shooting clinic, going for 32 points before fouling out with 42.8 seconds left.

“I was feeling good,” Williams said. “I had everything going.”

Despite that, Williams felt he could have played better.

“We did good running the plays. But I took some bad shots and missed a couple of them,” Williams said.

“It’s one of the best games he’s played this year,” Duncan said.

Duncan said the team had some tough turnovers, which hurt.

It was the second meeting between the two schools. Mt. Hermon won the first time 56-51 during the Pine Tournament on Dec. 14.

Until the fourth quarter Friday night, the biggest lead for either team was four points. That number went to five in Mt. Hermon’s favor twice in the fourth period.

The Yellow Jackets led 17-13 after the first quarter. With time running down in the opening period and the Yellow Jackets up 14-13, Jessie Pouncey, who scored 13 points in the game, was fouled on a buzzer-beating, quarter-court shot. He went to the line and nailed all three free throws for the 17-13 advantage.

Pine cut into the lead during the second quarter, and the Jackets were up 26-25 at the break.

The clubs played an even third quarter, and Mt. Hermon led 38-37 after three.

Pine went in front 42-39 with 6:34 left. Mt. Hermon called time out and then went on an 8-0 run. Williams hit two free throws before getting inside for two. Marshaun Dillon scored his only two points with a field goal before Williams hit a fast-break layup to put his team up 47-42, which forced Pine to call time out with 4:30 remaining.

Out of the timeout, Cody Cooper, who led the Raiders with 15 points, downed a 3-pointer.

Hyatt then converted a 3-point play for the Jackets to make it 50-45 before Pine took over down the stretch.

Also scoring for Pine were Trey Cooper with 10, Phelps with nine, Galloway with four, Devin Phillips with two and Jamie Adcox with one.