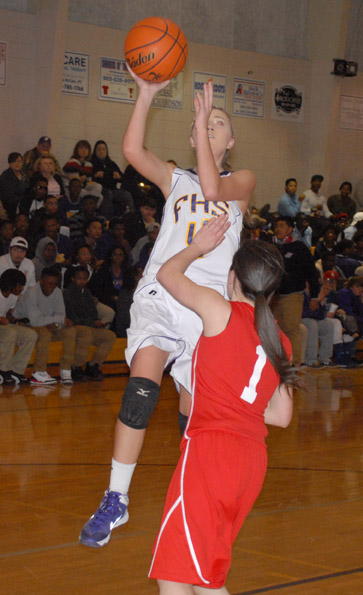 Franklinton allowed only a 3-pointer and a free throw in the first half and built a 29-4 lead by the break en route to a 51-25 District 8-4A victory over Pearl River at home Tuesday.

“We all have long arms. We all can read and telegraph their passes,” FHS’ Chelsea Armand said. “If we do that in every game, then I guess we can get more fast breaks and more shots in.”

FHS led 3-0 in the first quarter after Haley Sellers hit a jumper and Amber Carter split from the line with 4:59 left.

Pearl River (8-9, 1-1) tied things at the 3:09 mark when Sierra St. Pierre knocked down a 3-pointer, but it was the Lady Rebels’ final points until Bridgette Moore was fouled as time expired in the second quarter and hit 1-of-2 free throw attempts.

“They’re an outside shooting team, so we were going to put a little pressure on the outside,” FHS coach Paul Meyerchick said. “They missed a bunch of shots early on, and we converted on the other end and pulled that lead. I knew eventually they were going to hit some shots.”

After the trey, FHS’ offense got going. Tyeishia Anders, who scored eight in the game, drove the baseline and hit for two 15 seconds later. Sellers drained two free throws before driving to the hoop for a layup and a 9-3 advantage.

Franklinton’s offense continued to play well early in the second quarter. Pearl River started the period with possession, but Denetra Rayford came up with a steal, which led to Armand getting fouled on a put back attempt after grabbing an offensive rebound. She hit both free throws to make it 13-3.

Carter pulled down an offensive rebound on a fast break and made the follow up with 7:06 left, Armand nailed a 3-pointer from the left wing and then Sellers was good on a put back, forcing Pearl River to call timeout with 5:05 left in a 20-3 game.

The scoring stopped for a few minutes, but FHS’ Armand, Lana Thomas and Brandi Pittman all hit 3-pointers over the final 1:53, and it was 29-3.

Moore ended the Lady Rebels’ 11:09 scoring drought with a free throw to make it 29-4 at halftime.

Armand posted 12 for FHS, while Carter finished with six. Thomas tallied five with Pittman at three. Kierra Williams and Keona Martin both had two, and Shakeria Fabre added one.

Franklinton is back in action Tuesday at Salmen.