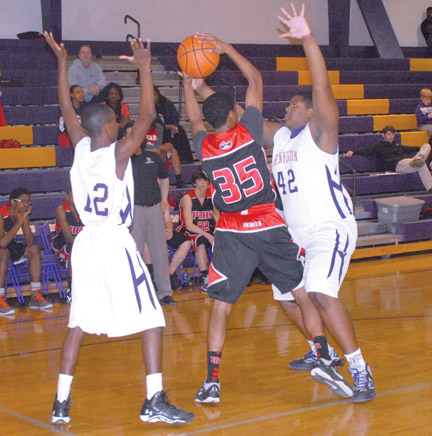 Franklinton’s Tray Anders scored a career-high 36 points and the Demons jumped to an 8-0 lead en route to an 85-40 victory over Pearl River in the District 8-4A opener at home Tuesday.

Anders, who scored 31 in the first half, said he felt good.

“I haven’t been shooting the ball well lately, so I figured this would be the first night to start,” Anders said. “I figure the rest of the season should be pretty good for me.”

FHS (13-7), which snapped a three-game losing streak, created some early turnovers to grab an 8-0 lead.

Anders made it 6-0 with an offensive rebound and put back before Azende T. Magee’s steal led to Anders’ layup, and the Demons had an 8-0 advantage with 5:10 on the clock.

Pearl River’s Tyler Kelly, who led the Rebels with 16 points, put his club on the board with two free throws, then FHS scored the next nine points.

Anders logged the first six. He hit two free throws before coming up with a steal and a layup then taking a pass from Azende O. Magee for another layup, making it 14-2 with 3:46 remaining.

“We came out with a new half-court trap that we put in,” FHS coach Randall Ginn said. “We’ve learned through this year that we’re quick and we’re small, but we hadn’t done a good job of maintaining our full-court pressure. So we’ve been utilizing more half-court pressure. I thought we got a lot of early turnovers and a lot of layups on the other end off of it.”

The Demons went inside to begin the second half, something Ginn didn’t feel they did enough in first half.

“We kind of got on them at halftime for neglecting Logan (Seal) and Adrian (Magee) and the guys inside,” Ginn said. “The other team had like six fouls four minutes into the third quarter, so I thought they really listened to the halftime message about working the ball inside in the third quarter. That is what I’m most proud of tonight.”

Seal scored inside for his first points off of an assist from Anders on the Demons’ first possession of the third quarter. Charmarl Magee threw to Dejion Alston for 3, and it was 49-21 at the 6:59 mark.

Kelly hit a jumper, then Azende T. Magee hit Nick Burkhalter inside, and he was fouled with 5:29 remaining. Burkhalter split from the line, but Seal grabbed the offensive rebound off Burkhalter’s miss and put it back in.

Then Charmarl Magee made a steal and hit the layup, and it was 57-24.