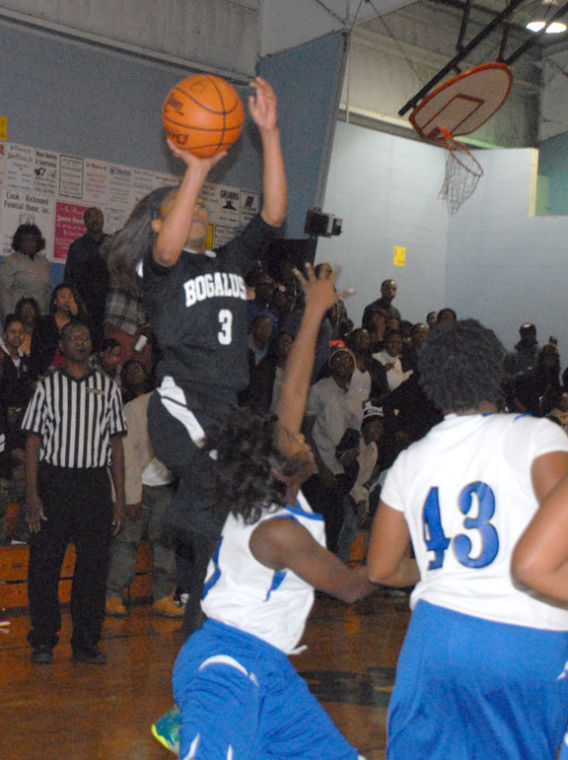 Bogalusa seventh-grader JaMya Young showed poise, determination and the ability to come through under pressure Tuesday in a double-overtime win over Varnado.

Young, who scored 47 points, sent the game to overtime then hit the game-winner in the second extra period to give the Lady Jacks an 81-79 victory.

The game was tied 79-79 and time was dwindling down. Young had the ball and looked like she was going drive to the basket, but with a defender in front she pulled up and shot, nailing it as the buzzer sounded.

“I tried to go to the hole, but I had to do a step back because they were stopping me,” Young said.

VHS’ Yienna Kemp, who scored 13 points in the game, made it a five-point margin at the outset of the third quarter.

Bogalusa (9-8) responded with five straight. Young found Erin Crawford for a layup before Nylijah Mingo, who tallied 16, nailed a 3-pointer to tie the game 29-29 with 7:12 remaining.

Varnado went up 38-33 with 2:58 showing on the clock, but BHS scored seven consecutive points.

Jasmine May, who had four, hit a field goal, then Young split from the line with 2:20 left after a technical foul was called on Varnado’s Tarralyn Moses. Next, Young drove to the bucket to tie the game 38-38, then she put Bogalusa in front when she rebounded her own miss and got the put back for the 40-38 edge.

Kemp ended the run by tying the game from the line with 30.5 seconds left in the third, but Young gave the Lady Jacks the lead at 43-40 after three with a trey at the 17-second mark.

The fourth quarter was close throughout, with neither team getting more than a four-point lead.

Varnado led 59-57 with 6.1 seconds left, but after a VHS miss a scramble for the loose ball ensued, and Young was fouled with 0.2 seconds left. Bogalusa was in the double bonus, meaning Young had two free throws. She delivered to tie the game at 59-59 and send it to overtime.

“The game was in my hands. I just wanted to make (the free throw),” Young said.

The first overtime went down to the wire. Bogalusa led 70-68 with 12.3 seconds left, then Varnado’s Errielle Stewart, who had a tremendous game of her own with 33 points, nailed two from the line to tie it at 70-70. The Lady Jacks got possession with 0.9 seconds left on the clock, but Young’s shot was off the mark and the game went into the second four-minute OT period.

BHS raced out to a 75-70 lead at the 2:25 mark with Young hitting a free throw and a field goal and Mingo draining a field goal.

Then Varnado tied it again at 77-77 with 1:32 left before taking the lead when Bianca Holmes found Stewart open for a layup.

Young tied the game with under a minute left before the game-winner.

Also scoring for Bogalusa were Crawford and Amia Peters with four points, D’Sha Rankins had three, Shanekqua Mingo two and Diamond Martin one.