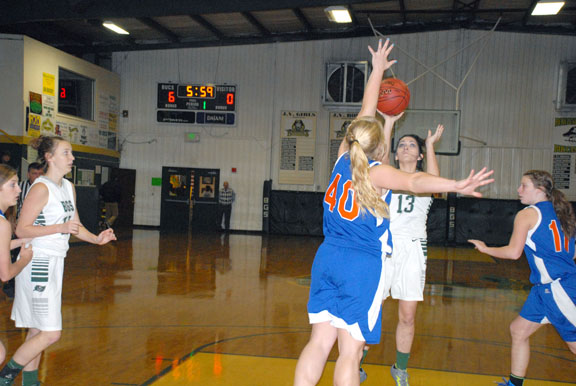 Bowling Green jumped out to a 29-4 halftime lead and never trailed in a 47-15 victory over Central Private on the road Thursday.

Nine players scored at least one point for the Lady Bucs

The Lady Buccaneers (16-1 at press time) led 6-2 in the first quarter and then ran off 13 straight points during a run that went into the second quarter.

Kristina Jarrell and Melissa Crowe capped the first period with the final five points by hitting a three and a two pointer respectively to make it 11-2 after one.

Jarrell was Bowling Green’s leading scorer with 12 points on 5-of-7 from the field, which included two treys. Jarrell also had four rebounds.

Bowling Green then opened the second quarter with the first eight points with BreAnna McNeese hitting for two, Jarrell scoring the next five points and Reagen Moody adding a free throw.

Central Private ended the run with a pair from the line. But McKinley Seal, who ended up with six points and two rebounds, scored four, and Moody, Jarrell and Riley Robertson all scored two to give Bowling Green the final 10 points in the half, bringing their lead to 29-4 at the break.

Also scoring for Bowling Green was Natalie Michael with four, while Katelyn Junkins and Lexi Volz both contributed one.

“We got some good looks, some open shots, easy buckets and we got to the foul line, which was because of our pressure and half-court defense,” King said. “I felt we dominated the rebounding battle. I don’t think they had any second-chance points.”

The Lady Bucs played against Silliman Saturday afternoon and returns to action Friday on the road against Centreville.

Girls’ junior varsity begins at 4 p.m. with boys JV and then girls and boys varsity to follow.