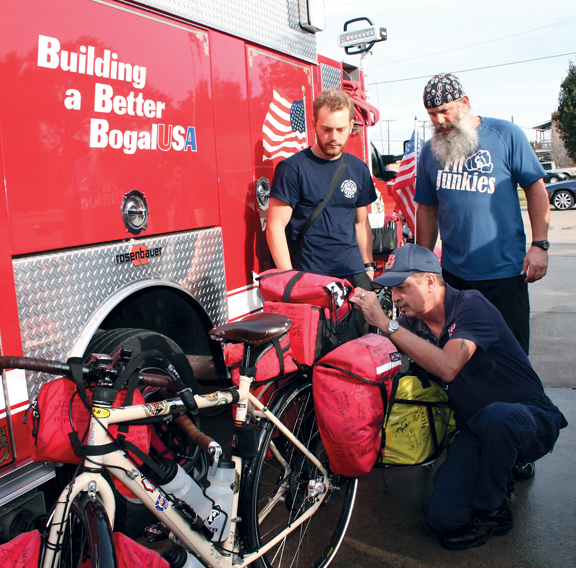 Bob Quick is more than halfway through what has been called the ride of his life.

It’s a charity ride, and people from all across America are among the beneficiaries — the Wounded Warrior Project, Special Olympics, McKay-Dee Cardiology, Primary Children’s Network and the Roy City Fire Department.

And while it’s not entirely unusual for someone to bicycle through Bogalusa in the midst of a cross-country ride designed to raise awareness for a cause, Quick’s case is different.

The cyclist from Roy, Utah, has advanced stage coronary artery disease, 17 stents and a pacemaker/defibrillator. He’s had two heart attacks and a stroke. If he succeeds, he will be the first man with his condition to ride a bike from the West Coast to the East Coast in a time of approximately 12 weeks.

Quick, supported by the companionship of his son, Conrad, started his journey from San Diego on Sept. 2, and the plan was to end the ride in St. Augustine, Fla., the week before Thanksgiving. That changed just before the men reached Bogalusa.

“I knew I would get exhausted but didn’t figure it would be a problem because I take every Sunday off and I rest weekends,” Quick said.

But just shy of eight weeks into the trip, the medical condition that left him with a heart working at one third of its normal capacity took a toll.

“Last Friday outside of Bogalusa, just past Plainview, I went down on the side of the road and was lying there in the grass,” Quick said. “A kid went by and came back and asked if we were OK. My son said, ‘Dad is hurting really bad.’ The kid said, ‘Let’s load the bikes up in the truck, and I’ll take you into town.’

“When we got there we met a police officer, Paul Pajak, who escorted us to the hotel. He was the only officer so far that said, ‘I’ll get on the bike and take it for a ride.’ I thought that was quite cool.”

The local hospitality was not done yet.

“The lady at the Traveler’s Rest, Melissa, said she had a friend in Bunkie and that she’d been following me online,” Quick said. “When we got to the suite I soaked in the tub and fell asleep. My son kept adding hot water. My legs hurt so bad.”

When it came time for the men to check out and resume their journey, which they had extended to include five days of rest and recuperation, the receptionist told them there would be no charge for their stay.

“They say people in Texas are so hospitable, but I think Louisiana takes it from them,” Quick said.

The charitable man who has now made it most of the way across the country expressed a fondness for the state.

“We’re having a wonderful time here in Louisiana,” Quick said. “The people are downright wonderful, and the food is wonderful. We’ve had gumbo, boudin, crawfish, shrimp… nothing but good food.”

But, although there is much to enjoy about the 3,000-plus mile ride, which will ultimately take the Quicks through eight states, it is not a pleasure trip.

The grueling pace of 50 miles a day would be hard on anyone, and Quick is not in optimal health. Still, he is determined, strong-willed and filled with an almost overwhelming, radiantly powerful spirit. He intends to raise $1 million for his charities, and he has his son, who gave up a job and learned CPR and advanced first aid before they both headed East on the Southern Tier Bicycle Route, to help him to his literal and figurative destinations.

Quick also has the support of firefighters throughout his route, thanks to his local department, which contacted them with requests to provide assessment tests, food, showers and shelter for him along the way.

Quick said he considers firefighters “true heroes and warriors who sacrifice every day by putting their lives on the line across America.”

The thousands of people who will benefit through his dedication to their causes would very likely add Quick to their own lists of heroes.

To check his progress or to donate to the cause, visit bobquicksjourney.com online or check him out on Facebook.