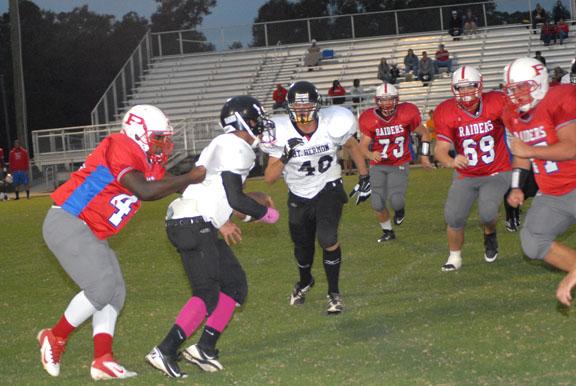 Pine jumped out to a 34-0 halftime lead and cruised to a 49-0 District 8-2A victory over Mt. Hermon Thursday night.

Mt Hermon has been in a tough spot all season in a district that features teams with many more players. They began with the season 23 players, but that number has fallen hard.

“Of the 12 that played, 10 of them never came off the field on special teams, offense or defense,” Crawford said. “That’s difficult, but I was proud of the guys and the effort they gave, fighting all of the way to the end. That’s what you’ve got to do with small numbers.”

Pine coach Bradley Seal, whose team snapped its four-game losing streak, said Mt. Hermon is in a tough situation and he credited the players for their effort.

“They play every snap, and they play hard,” Seal said. “They just don’t have a lot of depth. It says something about your character if you continue to come out and you only have (12) players.”

Pine quarterback Derrick Dillon ran the ball just three times but gained 171 yards with a pair of touchdowns (75 and 83 yards). On the season Dillon has 1,251 yards rushing and 17 TDs.

The Raiders (3-4, 1-3) played a quick, short passing game Thursday. Dillon was 6 for 7 passing for 61 yards and two touchdowns.

Pine drove the opening kickoff 53 yards on six plays, capped off when Tory Robertson ran in from the 15 and then converted the 2-point conversion for an 8-0 lead with 9:21 left.

Mt. Hermon picked up two first downs before punting. Jack Brister gaining three yards on second and 2 and the other by getting Pine to jump offsides.

Pine took possession at its own 25 and scored in one play when Dillon faked a handoff to Adarrius Berry and ran up the right sideline to the end zone. Devin Phillips’ extra point was good, and Pine led 15-0.

After Pine’s Markell Dillon forced a turnover on downs with a tackle for a 1-yard loss with Mt. Hermon facing fourth and 2, the first-quarter scoring ended with Berry scoring on a 10-yard run. Mt. Hermon’s Jase Fortenberry blocked the PAT, keeping it 21-0 after the first.

Pine added another score with Derrick Dillon finding Devonta Pigott on a 10-yard hookup. The PAT was no good, and it was 27-0 with 8:20 left in the first half.

Four minutes later, Derrick Dillon hit Nick Adcox on a crossing route for a 9-yard TD. Phillips upped it to 34-0, and it stayed that was until the second half.

“I just ran a little shallow, five yards to the end zone, and Derrick threw it straight on the money,” Adcox said.

Mt. Hermon tried a long pass to end the first half, but Jamie Adcox intercepted it, and the Raiders led 34-0 at halftime.

Mt. Hermon went three-and-out to begin the second half and punter Fortenberry got off a good punt and picked up a nice roll for a 49-yard kick down to Pine’s 17.

On the first play, Derrick Dillon fumbled the snap, picked it up and raced 83 yards for a touchdown. Nick Adcox took a high snap on the extra point and threw to Pigott, who found running room and got in for the 2-point conversion to make it 42-0.

The game’s final tally occurred 58 seconds into the fourth when Demarcus Fland ran in from the five. Phillips’ PAT was good for the 49-0 final.

Both teams return to action Friday. Pine is on the road against Springfield, while Mt. Hermon returns home to play Pope John Paul II.