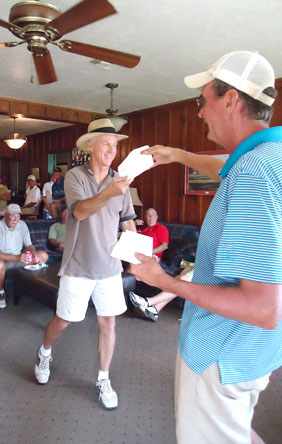 “It went real good,” Chief Volunteer Officer Stuart Parker said. “It’s probably the best tournament we’ve ever had. Mack McGehee was our coordinator, and he did a great job.”

Parker said they had a silent auction for the first time, which allowed them to raise more money.

“That was Mack’s idea,” Parker said. “We had a great turnout. We’ll do a few things different next year. Every year is a learning experience. We’ve got some thoughts on next year’s golf tournament. If it pans out to what we want to do, it could be our best golf tournament we’ve had. We enjoy doing it, and we want to make sure the golfers enjoy it as well. We appreciate the Country Club for putting it on and the golfers for participating in it. We appreciate the vendors and merchants for the advertising. Without their support, we can’t put this on.”

The tournament is the YMCA’s biggest fundraiser of the year.

“This allows us to sustain our programs throughout the year for what we offer the kids,” Parker said. “Even our after-school tutoring, this money helps go to our teachers’ salaries, so we can offer the free tutoring. Our first year, which was last year, was successful.”

The tournament was a two-man scramble.

Strahan was the Closest-to-the-Hole Contest winner. Ferguson was second, followed by Darryl Darden and Dwayne Billings.

The two specialized Rock Hopper road bikes were not raffled off because not enough tickets were sold. Parker said the raffle would continue at $20 a ticket until the quota is reached.