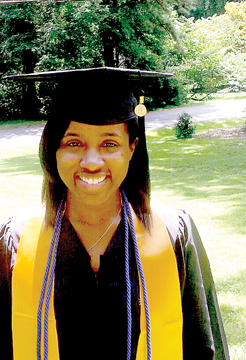 Ivanna Dionn Tate, daughter of former residents Farrell and Carla Tate of Franklinton and the granddaughter of the late Gearaldine Tate and Gwendolyn Francis “Skip” Hart of Franklinton, graduated from the Well Star School of Nursing at Kennesaw State University in Ken-nesaw, Ga. She received her Bachelor of Science Degree with honors in the Baccalaureate Nursing Program at the commencement exercises on Tuesday, July 30.