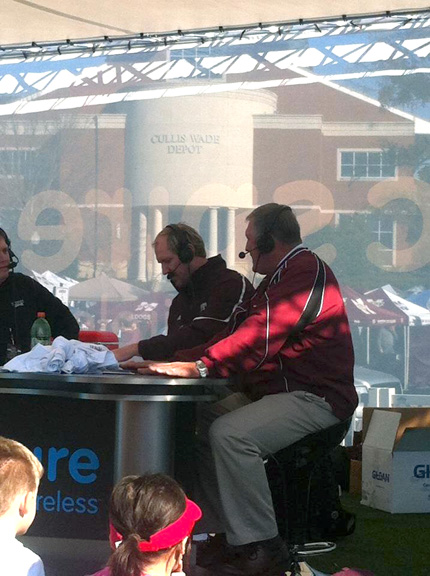 Bogalusan and former Lumberjacks coach Calvin Hymel was one of seven Mississippi State University standouts, and one of two Magic City natives, to receive the designation of Honorary Captain during Bulldogs home games this season.

Hymel was recognized in a ceremony prior to the MSU’s Nov. 17 winning match with the Arkansas Razorbacks.

After being interviewed on campus for a radio show, Hymel walked onto Davis Field for a ceremony that lasted more than hour. When the time for Hymel to be honored arrived, he moved to the 30-yard line and his name and picture were displayed on the video screen and his achievements at MSU announced. Then, a cake emblazoned with his name and number was awaiting him in the suite where he watched the game.

The group making to trip to Starkville, Miss. included his grandsons, D.J. and Devin Thomas.

Hymel said his grandsons enjoyed meeting former Franklinton High School and current MSU player Josh Robinson during the team’s pre-game warmup and that D.J. and Devin were able to be on the field before the ceremony.

“My grandsons had a great time and I did too,” he said. “I go up there all the time, but that’s the first time my grandsons got to go up there. It was just a great day.”

Though he was heavily recruited by LSU, Hymel elected to attend Mississippi State and played there as a middle linebacker from 1972 until 1975. One of the highlights of his MSU career came that first year, when he recovered a blocked punt and ran it into the end zone, becoming — under the 1972 Freshman Eligibility Rule — the first freshman in the Southeastern Conference to score a touchdown.

Other key moments included wins against LSU his junior and senior years; playing in MSU’s 1974 Sun Bowl victory against North Carolina; a 34-14 win over a favored Georgia team, when Hymel sacked the quarterback four times; and being named SEC Player of the Week on four occasions, he said.

After graduating from MSU in May 1975, with degrees in physical education and driver’s education and a minor in science, Hymel started coaching at Bogalusa High School in August 1976 under Lewis V. Murray Jr., who was Hymel’s coach when he played ball at the school. When Murray retired 10 years later, Hymel was named head coach and remained in the role for 17 years.

Bruce Plummer, who was named Honorary Captain of the Oct. 20 MSU game, played at Bogalusa High during Hymel’s time as assistant coach and later had a professional football career.

Hymel was at the school for seven additional years, teaching only driver’s ed, until his retirement after 34 years there.

Now, Hymel has his own driving school in Bogalusa and is a member of the Bogalusa City School Board, having run for the position because he thought he could “make a difference.”

“We do have a lot of great changes going on at Bogalusa High,” he said. “We’re doing a lot of remodeling, and I really believe our scores are going to come up.”

Lifelong Bogalusa resident Hymel said it means a great deal to him to be recognized by his university.

“It was really a good experience for me because I got an education out of it,” he said about his time at MSU. “I was able to come back and coach in my hometown, and I’ve never left here. That’s the only time I’ve really been out of Louisiana is the four years I spent up there. It was just a great honor.”

Hymel closed by saying he enjoys all SEC football, and “not just Mississippi State.”

“But that was my college. I’m a Bulldog and always will be,” he said.