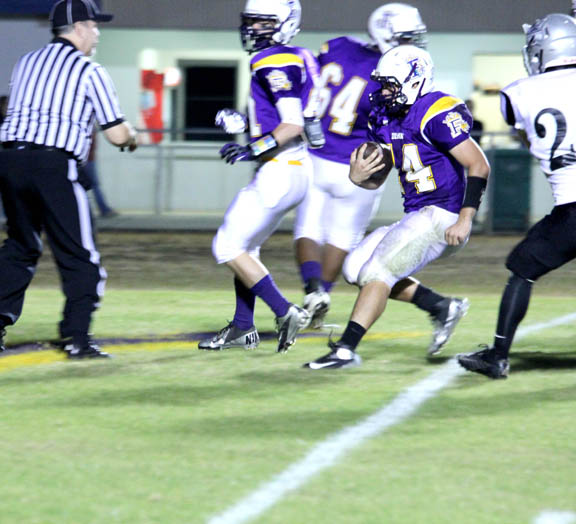 Franklinton had their hands full with the Lakeshore Titans Friday night in Demon Stadium, but held on for a 39-36 victory in their final regular season game. Before the game, coach Shane Smith said he wanted his team to come out and play their best game. Smith also said he wanted his team to play hard and come out with a victory and go into the playoffs on a positive note.

Lakeshore coach Larry Route said his goal was for his club to continue to improve. Route said his team was a little outmanned, but he expected them to play hard and put up a good fight.

The contest began with the Demons (6-3, 3-1) receiving the opening kickoff, going three-and-out and punting. The Titans (1-8, 0-4) took possession and started a drive. Nathan Faciane completed a pass to Jared Scot on second down for 17 yards. After a couple of penalties by the Demons that gave the Titans another first down, Faciane connected with Xavier Chatman for 25 yards. Faciane then kept and ran up the middle for 10 yards. The Demons held on downs and forced the Titans to attempt a field goal, which was missed.

After a couple of change of possessions, the Demons mounted a possession that ended in a touchdown when Austin Armand completed a 21-yard pass to James Magee and then capped off the drive with a 3-yard touchdown run. The snap was bobbled on the point after and the score remained 6-0.

Milton Gonzales intercepted a Faciane pass to halt the following LHS possession. Two plays later, Armand ran around the left end on a broken play and went 47 yards for a score. Alex Herbert hit the point after for a 13-0 lead after the first.

The second quarter began with the Demons driving once more. Armand connected with Kendrick Brumfield for 20 yards and then kept on the next play for a 20-yard run to the Titans’ 6-yard line. After a penalty, Armand hit Azende Magee for a 16-yard TD. The extra point was good to make it 20-0.

On the Titans‚ next possession, David Ducre carried the load with four rushes for 50 yards. The last, a direct snap, he took five yards for a touchdown. Ian Jones made the point after to make it 20-7. The Demons responded by running back the kickoff, with the possession ending with Ron Robinson carrying 26 yards for a touchdown. The point after was good making the score 27-7.

“We took an early lead and then started making some mistakes,” Smith said. He also mentioned that they had some trouble in transitioning players on and off the field.

After the kickoff, Lakeshore found more life. Faciane connected with Tyler Thames for a 35-yard completion on fourth-and-long. A couple of plays later, Faciane took the ball around the right end and went 58 yards for the tally. Jones made the point after and helped close the gap to 27-14.

After the kickoff, the Demons were forced to punt and Scott returned the punt 50 yards for a score. The extra point was successful, trimming the Demons’ lead to 27-21 by halftime. Halfway through the third, Faciane completed a 39-yard pass to Scott. Ducre carried the ball 10 yards on the next play for the score. Jones made the point after, putting his club ahead 28-27.

The Demons responded, capping their drive with a 23-yard touchdown pass from Armand to Brumfield. Franklinton failed on a two-point conversion and the score remained 33-28 going into the fourth quarter. After stopping the Titans, the Demons mounted one last drive to put the game away, which ended with a 13-yard touchdown run by Renaz Wilson. The Demons failed again on a two-point attempt and the score was now 39-28.

With just under two minutes left, the Demons set up for a 70-yard field goal attempt. Scott caught the kick and returned it 80 yards for a touchdown. The Titans were successful on a two-point conversion and it was 39-36. Following the game, Smith said the reason for the attempt was their punt-snapper got ejected and they had more confidence in their field goal snapper getting it to the holder and having their place kicker attempt to send it out of bounds. Had the field goal attempt gone out of bounds, Lakeshore would have started their next possession at that spot.

The Titans attempted an onside kick on the kickoff but the Demons recovered. Armand handed the ball off a couple of times and then knelt to run out the clock. Coach Route said he was proud of his team.

“They played very hard and I couldn’t ask more of them.” Route also mentioned that despite his team’ s record, they have played some close games.