Bad conditions|Pioneers too much for Bowling Green in season opener 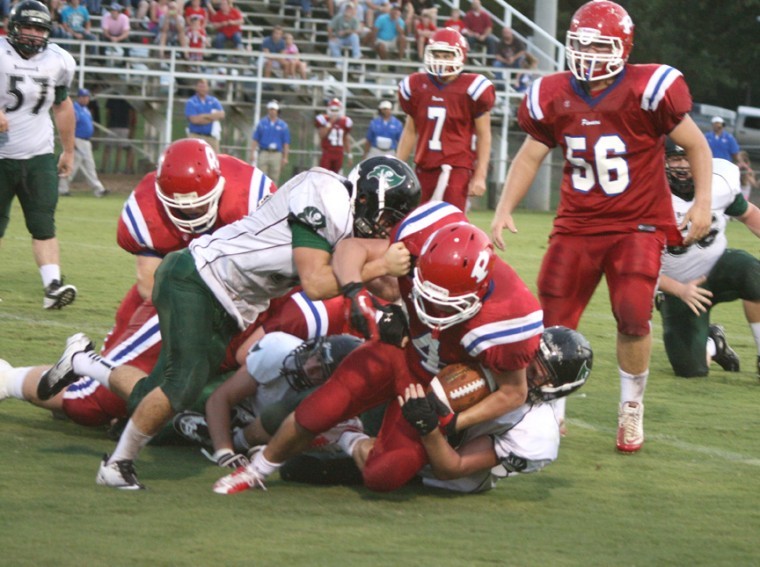 MCCOMB, Miss. – Parklane Academy jumped out to a five-touchdown lead in the first half and never looked back on the way to a 45-6 Mississippi Association of Independent Schools season opening victory over Bowling Green on Friday night at Cowart Smith Stadium.

“They beat us in every phase of the game,” Bowling Green coach Carmon Moore said. “They were better blockers. They were better tacklers. And they were well prepared. The only thing that I can tell you about my players is that I thought we played hard even under the bad conditions that we got ourselves into. As hard as we have worked during the summer, I wouldn’t expect us to not play hard but this is a team that was just a lot better than us.”

“We could have played better against a really good team like this but that just didn’t happen so we have to learn from our mistakes because we did a few things that we should have done a better job of preparing for. I think we are a good team and will do better as the season goes on but playing against these kind of people will only make us tougher down the road.”

Justin Brent (59 yards) and Jack Dumas (41 yards) each had two catches and one touchdown and Taylor Burt and Logan Morel (touchdown) each had 28 yards rushing.

Patrick Roublow scored the Buccaneers’ lone touchdown on a 34-yard catch and run from Conner McCain in the waning moments. Jake Williams and Hayden Thompson each rushed for 17 yards.

Colby Knight dropped Clark for a loss on the Pioneers’ opening 65-yard drive but his 3-yard run capped the 10-play possession and Zack McDaniel’s point after touchdown kick gave Parklane a 7-0 lead with 7:01 left to play in the first quarter.

Clark added another 3-yard touchdown run on the Pioneers’ next possession to cap an 11-play, 63-yard drive. Russ Smith sacked Lea for a 2-yard loss but a pass interference call on a jump ball gave Parklane a first down and McDaniel’s kick made it 14-0 with 10:44 left in the first half.

James Michael Schmidt intercepted McCain on the next offensive play and Lea connected with Dumas for a 32-yard touchdown reception four plays later to make it 21-0 with 8:24 left in the second.

Lea hit Brent over the middle for a 26-yard touchdown two plays after Cody Harvey recovered a pooch kickoff to extend the lead less than a minute later.

James Lavigne returned the ensuing kickoff 44 yards to near midfield and Bowling Green advanced into Pioneer territory on Williams’ 9-yard run but the drive stalled and McCain threw incomplete as Roublow was sandwiched.

Three possessions later, Clark scored again from 1-yard and McDaniel’s kick made it 35-0 with 18 seconds left in the half.

Stuart Slade, Drew Varnado, Sebastion Milton and Coleman Knight combined to drop Burt for no gain twice on the Pioneers’ opening possession of the second half before Alex Mizell hit him for a 7-yard loss but McDaniel connected on a 32-yard field goal to make it 38-0 with 3:25 left in the third.

Morel’s 6-yard touchdown run capped the Pioneers’ next possession after McCain was sacked on fourth down.

Thompson rushed across midfield on the final series before Roublow juked and jived into the end zone on a quick pass from McCain to reflect the final tally.