Building stone|Eagles’ varsity too much for Baton Rouge in jamboree 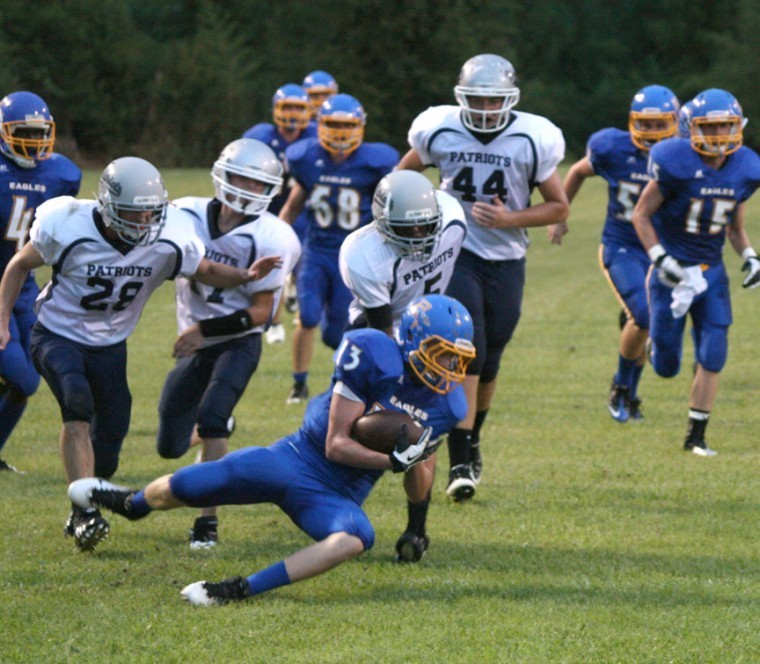 “We got something to build on,” Ben’s Ford coach Tommy Pittman said. “That is the main thing. We accomplished what we wanted tonight. We saw what would work and I don’t think they got close to scoring.

“Our line did awesome. They blocked and gave our guy a chance to throw that opened up the middle to run. I am real proud of the kids. We are just going to keep working hard and I am excited about what the year holds.”

The Eagles had two varsity touchdowns negated by penalties in the first half that could have blown open the game.

“We are going to go over those penalties that we had this week,” Pittman said. “Just some costly things but these kids are young and haven’t played a lot of football so I think that will come the more they are around the game.”

Aarron Taylor had a tackle for a loss to open varsity play and Pittman connected with Cole Edwards for an 11-yard pickup on the Eagles’ first play but the drive stalled. However, Crain recovered the ensuing fumbled punt at the Patriot 8. Again, Ben’s Ford stalled after a touchdown reception by Edwards was negated.

Cody Stewart returned the Patriots’ next punt for a touchdown that was negated following another tackle for loss by Taylor.

Crain hauled in a back shoulder go route from Pittman on fourth down for a 19-yard touchdown with three seconds remaining in the half after his 56-yard catch and run set the Eagles up at the Patriot 9. Crain intercepted Arek Moslander on the final play of the half.

Tyler Dixon rushed for a 15-yard touchdown in the third quarter and finished with 58 yards for the Patriots.

Kaylin Stewart’s 22-yard run pushed the Eagles’ into Baton Rouge territory in the fourth quarter but the drive stalled after a 14-yard reception by Bryan Johnson. Drew Creel sacked Moslander for a 7-yard loss on the Patriots’ final series.

Cory Caldwell rushed for 42 yards on 11 attempts for Ben’s Ford in junior varsity play. Stewart had a 17 and 10-yard run with the JV as well.