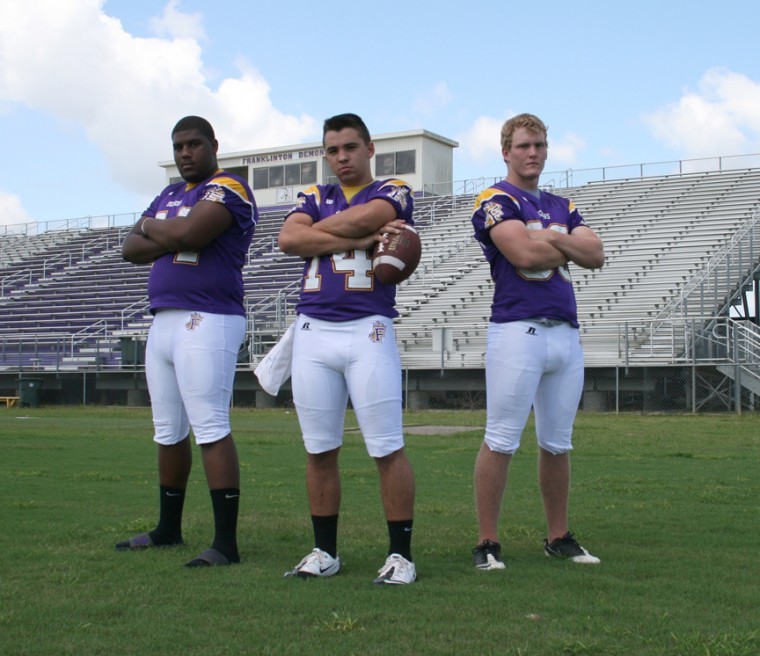 Franklinton High School seniors Austin Armand, Brandon McMasters and Quinton Cooper still remember what it feels like to be champions. They were sophomores on the Demons’ first state championship in football two years ago and saw what it takes to get to the top.

The Demons advanced to the title game two years in a row, compiling a 14-1 record in each of those years but after replacing 22 seniors and facing a brutal schedule, fell to a 5-6 mark last year after losing to South Terrebonne in the Class 4A bi-district playoffs. However, Franklinton still claimed a share of the District 9-4A title with a 3-1 record while advancing to the postseason for the sixth straight season.

“We have so far to go but in comparison to this time last year, I feel confident that our kids have more stock into what we are trying to do going into the season,” Franklinton coach Shane Smith said. “These kids have a lot to live up to and I think that is a good thing. It is not something that can be taken granted for.”

“You have to find a way to have a positive influence on your teammates. There will be times when you get frustrated with someone but you have to handle it in a way that will maintain their confidence so that they can continue to play at a high level.”

Armand earned All-District at quarterback last season after completing 40-of-72 passes for 553 yards and four touchdowns in five starts. He rushed for 364 yards and five touchdowns on 93 attempts for the season.

They are apart of a class of 15 seniors that includes Kendrick Brumfield, Christian Thomas, Nick Mizell, Linton Brumfield and Alex Herbert, all returning with valuable experience and others. The group is 33-8 in three years at the school.

“They have more experience and our summer attendance was a lot better this year,” Smith said. “They have to be leaders by having a positive impact on the rest of the team and that is what we are challenging them with.”

The trio got plenty of exposure to leadership from the seniors that won the title in 2010.

“Being a leader is about coming out here and giving your all day in and day out till the final whistle blows,” Armand said. “When other people see that, they pick up on it. We are trying to interpret what they went through. Last year, we didn’t have a set depth chart until Week 7 and I think we got caught looking forward instead of at the next game.”

“They kept spirits high, were real disciplined and focused and inspire me,” McMasters said. “Losing that many players is pretty hard but you can’t dwell on the past. You just have to strive for the future. You lead by giving maximum effort. If you don’t have leaders, others fall off and become undisciplined.”

“Those guys worked hard and showed us what it takes,” Cooper said. “We started fresh last year and had to play guys in different positions but as the season went on, we gradually got better and began functioning like a team.”

Football and family mean a lot to the group as they strive to represent the Town of Franklinton the best they can.

“You come together as a family on a football team,” McMasters said. “It means the world to a lot of people and keeps you focused.”

“I have been playing football my whole life,” Cooper said. “I just love the feeling you get at the beginning of the game when you get butterflies in your stomach and your adrenaline starts running.

“My grandpa (Earl Cooper) has always been behind me. I just always look up to him because he never quits anything and works hard.”

Armand said he draws inspiration from Bethany Hamilton, a professional surfer known for surviving a shark attack in which she lost her left arm.

“It inspires me how she wanted to get back in the water right away,” Armand said. “She didn’t ask for any special treatment and didn’t feel sorry for herself. That makes me strive to do my very best at everything like it is my last because you never know if something could be taken away from you.”

“I didn’t think I would like football very much when I first started playing but it is amazing to feel the electricity running through the air. We have had a successful program here and it just gives the school and town something to come together for and be proud of.”

Following a season that some may not be accustomed to, the trio says the key for this year’s edition is to unify.

“I just want us to come together with one heartbeat and get out there and win some football games,” Cooper said.

“Talk is cheap,” McMasters said. “You just have to work harder week in and week out preparing for the next team. Unity is the best thing for the team.”

“I just want us to be one unit,” Armand said. “We didn’t have that last year and it got under my skin knowing that people would come out here trying to stunt. If we look alike, play alike and act alike, there is no way we can lose.”