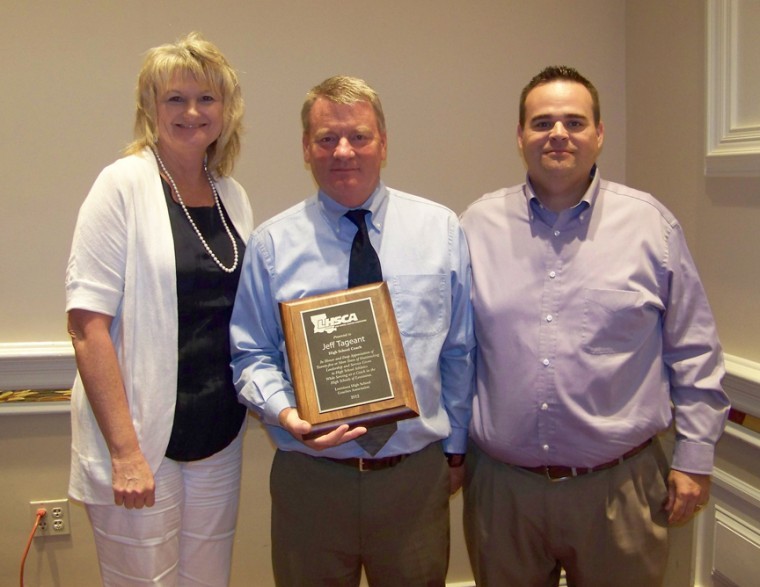 Franklinton head baseball coach Jeff Tageant was recently recognized at the Louisiana High School Coaches Association’s annual clinic in Baton Rouge for 25 years of service and leadership given to high school athletics while serving as a coach in the high schools of Louisiana.

Tageant has coached his entire career in Washington Parish at Franklinton High School where he has been the head baseball coach for 24 years. He also was an assistant football coach for ten years.

During his tenure he has coached his teams to 386 wins, 198 losses and two ties, achieved nine district championships, 12 times district runners-up and reached the post season state playoffs in 21 of his 24 seasons with 22 winning seasons. Tageant has been named District Coach of the Year nine times was President of the Louisiana Baseball Coaches Association in 2009 and an assistant coach for the LBCA All-Star team in 2010. This past season, he was an assistant coach for the Northshore/Southshore All-Star Team that played at Zephyr Field in New Orleans.

“The past 25 years have passed in a flash,” Tageant said. “I have coached many fine young men in both baseball and football and have enjoyed watching them become successful in their own careers. It has been an honor to have been a part of the great athletic traditions at Franklinton High School, and I look for ward to the future and continuing to maintain the standard of excellence that is Demon Baseball.

“I am a lucky man. I get up every day and go to a job that I love. You can’t ask for more than that.”

Roland Skinner, coach of Mandeville High School, presented Tageant with his plaque and noted that 25 years of coaching was a great accomplishment but for it to be at a single school was most noteworthy.