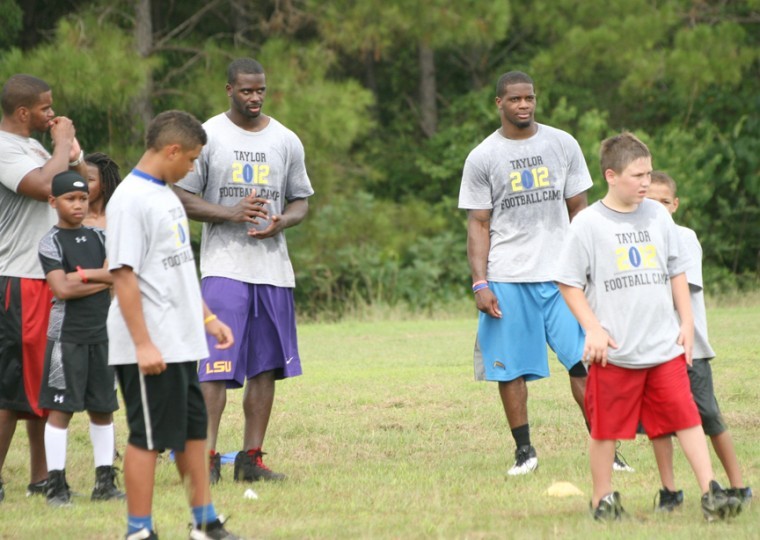 Growing up one of nine siblings in a household, brothers Curtis and Brandon Taylor developed a competitive drive at an early age. It comes natural with that many kids grappling for attention.

The Taylors took that spirit and developed it into blossoming football careers. Products of Franklinton and LSU where each played in a BCS Championship game, Curtis, who won the title in 2007 over Ohio State, was drafted by the San Francisco 49ers and is now with the Oakland Raiders and Brandon, who fell to Alabama in 2011 after a previously undefeated season was selected by the San Diego Chargers this spring.

“We grew up in a house with competition so it is in our blood,” Brandon said. “We have always been competing against each other to see who is going to be the best in everything but it is all fun because at the end of the day we know we are just pushing each other to get better.”

The sons of Curtis Sr. and Annette got plenty of help from their family in hosting the Taylor Football Camp recently at Franklinton’s Demon Stadium.

“Everyone I grew up with always worked hard and we always pushed each other even if we were at home playing in the yard,” Curtis said. “I was never an inside kid, so I was always outside doing something and great things happened from that.”

Both brothers know they wouldn’t be where they are now without those who helped along the way and that is why they started the camp.

“There has been a lot of people that have supported my family and all these kids through the years and this is just a small opportunity for us to give back to them,” Curtis said.

“I had a great experience at LSU. I had an opportunity to win a National Championship and I graduated from college which I am very proud of. I had my good days and bad days but overall, I enjoyed it dearly and it is something that I will never forget.”

The desire to compete has helped the brothers to conquer hardships. Brandon broke his foot as a junior in college but returned for his senior season and was presented LSU’s No. 18 jersey symbolizing overcoming adversity.

“When I broke my foot, I just could have hung my head down and got down on myself but I worked hard to get back,” Brandon said. “That was when I was promoted to the No. 18 jersey which gave me a big boost of confidence and made me play hard all year. That got me to the position where I am at now and I just have to keep on pressing because I am not satisfied.”

If taking on challenges and striving to be the best are indications of their vocations, Curtis and Brandon have bright futures ahead.

“You can’t just be good on the field,” Brandon said. “You have to be good off the field, too.”

“I am simple guy,” Curtis said. “I have always worked hard and am still working hard. That is what got me here now. You have to stay focused in whatever goals you are trying to accomplish.”