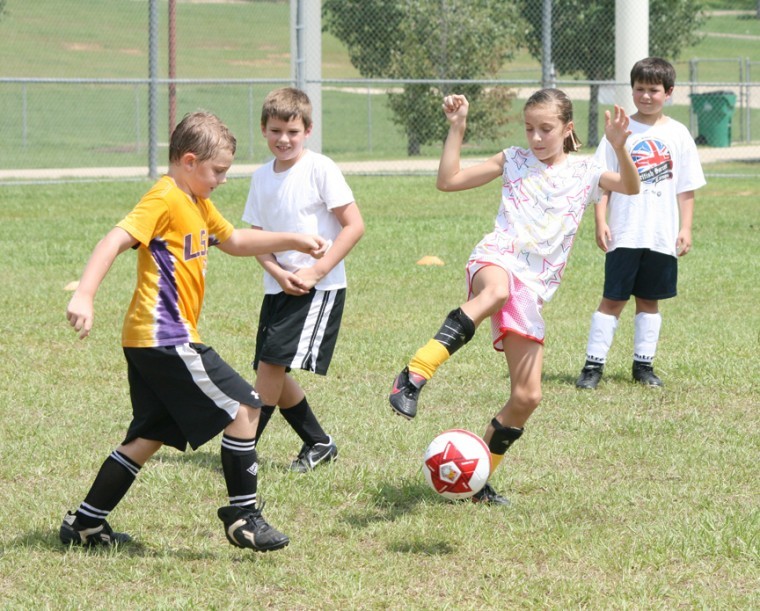 There was plenty of, running, kicking and shooting going on at the inaugural British Soccer Camps hosted by the Bogalusa Parks and Recreation Department on Wednesday morning at the Bogalusa Sports Complex.

But the focus was more dedicated to introducing campers to a non-traditional sport.

“A lot of people are usually skeptical about a first-year thing but I know the kids are enjoying the experience of learning the game of soccer,” director Landon Tims said. “Not only do the kids get expert coaching advice but they also get a cultural exchange with someone overseas. It really gives them something to look forward to.”

Tims got the idea to bring the camp to Bogalusa from a convention in Lake Charles. British Soccer Camps travel throughout the U.S. conducting camps in five different age groups.

The week-long camp is conducted by some of the 1,100 British coaches that come from England, Scotland, Wales and Northern Ireland each summer and reached over 120,000 kids last summer.

“There is not a lot for them to do during the summer months, so this is like a breath of fresh air,” British coach Stuart Hinton said. “It is a little bit different for them and they love mocking my accent as well.”

Hinton is based in the Texas and Louisiana region and said the camp includes core skills including dribbling, passing, shooting and defending to go along with an introduction to soccer for campers as young as three.

“It is a great sport for young kids that couldn’t get involved in others at that age,” Hinton said. “It is not one of the top sports in America, so we try to promote it so that it becomes more popular with the kids.”

Hinton said about 30 kids attended the inaugural camp and expects it to grow each year. Camps have grown to include 250 kids and 15 coaches.

“This is one of our smaller camps because it is in its first year but hopefully it will get bigger every year.”

Hinton said the camp also focuses on the history of the game of soccer and campers are given a chance to represent different teams of the world.

“We try to make it educational as well,” Hinton said.