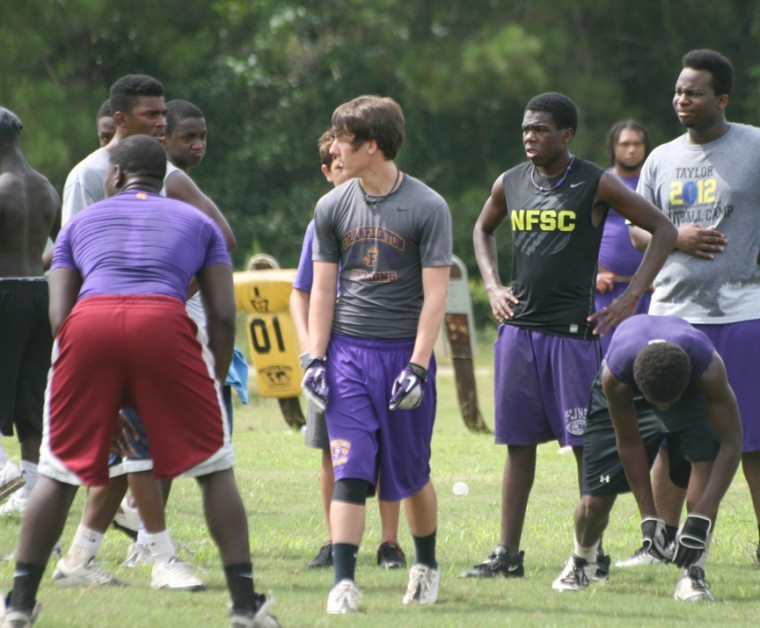 There was plenty of passing, catching and running going on at the Third Taylor Football Camp on Saturday morning at Franklinton High School’s Demon Stadium.

But the focus was more dedicated to giving back.

“We just want to give them the basic fundamentals so that if they want to play football in the future, they will have a little taste of it,” Curtis Taylor said.

The Taylor family began the football camp a couple of years ago after Curtis Taylor, who is currently with the Oakland Raiders, won the BCS Championship with LSU in 2007 and was drafted by the San Francisco 49ers. Brother Brandon Taylor, also a product of LSU who played in the 2011 BCS Championship, was drafted by the San Diego Chargers in the spring.

“The main thing we want to teach them out here is quickness,” Brandon Taylor said. “You have to be as fast as you can in a short amount of time because you only see a couple of long plays in football.”

The Taylors are the sons of Curtis Sr. and Annette Taylor of Franklinton and products of the Demons’ program under Shane Smith. The family includes nine kids and many of helped with the camp.

“We grew up in a house with competition so it is in our blood,” Brandon Taylor said. “It is all in fun because at the end of the day, we know we are just pushing each other to be better.”

“There has been a lot of people supporting me, my brother, family and all these kids through the years so this is just a small opportunity for us to give back to them.”

The camp begins with stretching and running before drills with dummies and 7 on 7 passing.

“They provide an inspiration for a lot of these young kids that are out here today,” Smith said. “It is a special situation when you have guys that let these kids know that they were in their shoes at some point.”

Some of the other former players attending the camp included LSU running back Terrence Magee and Southern Mississippi wide receiver Chris Briggs, members of the Demons’ 2010 state championship.

“It is home and why wouldn’t you want to come back,” Magee said. “If you have something it is nothing unless you give back and all of us have been blessed with a great talent so it is only right for us.”

“It give us a chance to remember when we were in the same position as these kids are in looking up to different people,” Briggs said. “Now we have people looking up to us and we have to continue to give back like the people before us.”

The camp drew about 200 kids throughout the Town of Franklinton and Washington Parish.

“They worked hard and everybody pushed each other so that is all I could ask for,” Curtis Taylor said. “There is an opportunity in everything you participate in and we just want them to stay focused in whatever goals they are trying to accomplish.”

“I hope this gives them the confidence to know that they can do the same things we have done,” Brandon Taylor said. “It means a lot because we have been in the same situation as these kids growing up.”