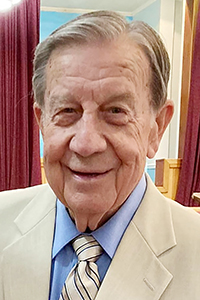 Visitation will be held at Second Baptist Church from 9 a.m. until the hour of services Friday.

Joe was born Nov. 5, 1937, in Bogalusa, son of the late Robert Clarence and Grace (Applewhite) Wheat. He married Michelle (Homra) Wheat on May 28, 2004. She survives. Joe had been employed as captain of the Bogalusa Fire Department for 16 years, the former Turner Dairy in Fulton, Tenn., for 17 years as distribution manager and facilities superintendent at Second Baptist Church for seven years. He was a member of Second Baptist Church, where he taught the Joe Wheat Sunday school class and had sung in the choir. At the time of his death, Joe was serving as music director of Mt. Pelia Baptist Church. He had served as music director and youth minister since the age of 20 at churches in several other states. Joe was a veteran of the United States Navy Reserve.

He was also preceded in death by one son, Joe Allen Wheat.

Condolences may be left for the family online at www.emfuneralhome.com.