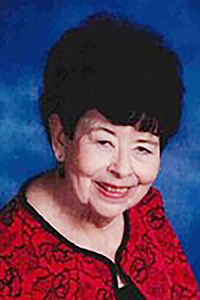 Margaret Miller Ryals, 87, of Bogalusa, peacefully completed her life on June 5, 2022, a life she lived in faith and love for her family.

Visitation will be held from noon until 2 p.m. on Sunday, June 12, at Poole-Ritchie Funeral Home in Bogalusa, with funeral services to follow at 2 p.m. Graveside services will follow at New Zion Cemetery in Tylertown, Miss.

Mrs. Ryals was born on Dec. 29, 1934, in Meridian, Miss., to Charles Virgil Miller and Daisy Hamacher Miller. She grew up in Quitman, Miss., where she graduated from Quitman High School. Following graduation, she attended Mississippi College where she met and married Bill Ryals in 1954, the love of her life. After Bill graduated from Mississippi College with a Bachelor of Science in Chemistry they enrolled at the University of Mississippi in Oxford where Margaret completed her studies and received a Bachelor of Arts in Education and Bill went to graduate school. Following graduate school Bill enlisted in the Army and Margaret joined him while he was stationed in Oahu, Hawaii. Upon returning to the states they moved to Bogalusa, where they raised their four children. Margaret was greatly involved in the community. She served their church, First Baptist, where Margaret taught the Pre-K Sunday school class, Vacation Bible School and was a member of the Flower Committee for many years. She served her community through various leadership roles in the Civic League, YWCA Board, Magic City Garden Club Counsel, Museum of Cassidy Park Board and Washington Parish Fair Association Board. Margaret held many offices as a member of the Oushola Chapter National Society Daughters of the American Revolution. She was an active member of the Roogaroo and GG Carnival Group which she enjoyed for many years. Professionally, Margaret spent her 38-year career protecting children in her role with the Louisiana Office of Community Service in Washington Parish. Margaret loved and supported her husband and children in every way. While Bill’s job took him away from home for weeks at a time, she had the sole responsibility of raising their children. She was involved with their school activities, led organizations such as Camp Fire Girls, transported them to dance lessons as well as team sports activities. She was very proud of the accomplishments of her children. Margaret’s true talent was in her ability to grow and arrange flowers for all occasions, for example birthdays, weddings and all special events. Margaret enjoyed spending time with her Bogalusa Garden Guild family. Her long-standing floral talents were publicly recognized recently, and she was awarded the Circle of Roses Pin presented to her from The Louisiana Garden Club Federation. This is a special award given to honor garden club members who have given of their time and talent to garden club work. Her knowledge of horticulture was impressive, and she used that knowledge to landscape the Washington Parish Library, plant trees at the YWCA and on Willis Avenue, and maintain a garden site on Louisiana Avenue at the entrance to the city. She tirelessly sought every opportunity to beautify Bogalusa.