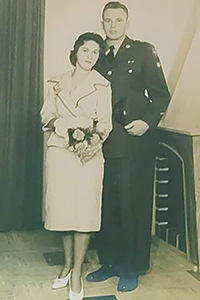 On April 30, 2022, Mr. Benjamin “B.J.” Mizell passed away at the age of 87 at his home in Bush, surrounded by family. Mr. Mizell was a lifelong resident of Bush and Sun communities. He was a member of First Baptist Church of Sun, where he served as a Deacon for many years. As a veteran of the U.S. Army, he found the love of his life while stationed in Germany, the late Mrs. Hildegard Mizell. God played a role with putting together a country boy from Sun and a Sudeten German girl together.

He loved his community. He spent many years working at the Sun Silica plant and served as Police Chief of Sun. Later in life he retired from Ponchartrain Materials in Honey Island Swamp. He loved talking to people and playing pranks on all his numerous nieces and nephews. They were so blessed to have an Uncle Ben.

Mr. Mizell is survived by a son, Benjamin Daniel Mizell; one daughter, Patricia Mizell; one grandson, Andrew Foster; one sister, Verena Mae (Jackie) Bennett; and numerous nieces, nephews, and other family and friends.

He was preceded in death by his loving wife of 60 years, Hildegard Mizell; his parents, Marcus and Relia Verena Mizell; a brother and his wife, Robert and Sylvia Mizell; two sisters and their husbands, Editha Rose and Donald Jarrell and Annie Amelia and “W.T.” Ingram.

Brown-McGehee Funeral Home was entrusted with final arrangements. On Thursday, May 5, at 11 a.m. a graveside service will take place at Mizell Cemetery in Sun, on Bozy Mizell Road. Bro. Stan Salassi will be officiating. There will be food and fellowship, two of his favorite things, immediately following at the First Baptist Church in Sun on Highway 16. The fellowship hall in the back will be open early. The pallbearers will be as follows: Mark Wayne Bennett, Robert Wayne Mizell, Duke Bennett, Bobby Breland, Clint Shaw and Paul Koenig, and one honorary pallbearer, Ricky Killingsworth.