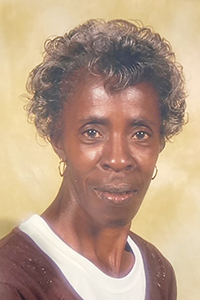 Alice Lena Lotts was born in Magnolia, Miss., on July 3, 1940, to the union of Howard Smith and Mary Lee Cotton. She was the youngest sibling of five children. Alice was called home to be with God, peacefully departed this life, and gained her wings on Monday night March 21, 2022, at the age of 81.

Growing up in Magnolia, Alice was baptized at a young age and accepted Christ into her life. She attended school until the ninth grade, worked in the fields of Pike County, and later became a housekeeper and homemaker. Alice married the late Alex Lotts and to this union they had two daughters.

After the death of her husband, Alice moved to Bogalusa, where she spent most of her life. Alice dated her longtime companion, Cleon “Peter” Henry of Bogalusa. While in Bogalusa, she dedicated most of her time to raising her grandchildren and godchildren. Her sweet humble spirit was felt with anyone she met and will continue to live in our hearts forever.

The memorial service will be held at Cook-Richmond Funeral Home on Saturday, April 2, at noon. Repast will follow immediately at the residence of Lena Lotts (810 Grove Ave. in Bogalusa).