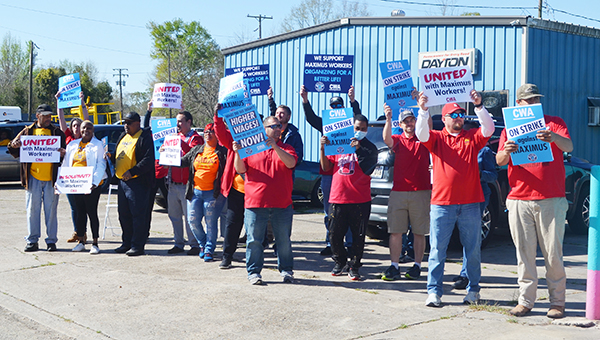 Maximus employees and other affiliated groups join in a strike demonstration Wednesday along Columbia Street in Bogalusa. (Photo by Justin Schuver)

On Wednesday, call center workers at Maximus in Bogalusa joined their colleagues in Hattiesburg, Miss., in a one-day strike to protest work conditions at their place of employment.

The day of March 23 was specifically chosen, as it was the 12th anniversary of the passage of the Affordable Care Act (commonly known as “Obamacare”). Maximus is a federal contractor that employs one of the largest federally contracted workforces in the country, under a contract with the Centers for Medicare and Medicaid Services (CMS). Employees typically handle questions that citizens have about federal health care programs, such as Medicare, Medicaid and Obamacare.

The Maximus employees elected to strike after the company reportedly ignored their demands for higher pay, paid sick leave and the opportunity to unionize without retaliation. There are approximately 10,000 Maximus agents at 11 call centers in nine states, but the two largest are in Bogalusa and Hattiesburg.

“I’m going on strike to protest unfair labor practices by Maximus and to demand paid sick days, equal pay with other federal call center workers, and that Maximus stop interfering with our right to organize,” said Mya Harris, a Maximus call center employee in Bogalusa. “We need these basic improvements to our working conditions for ourselves and our families, because no one working for a multi-billion dollar corporation like Maximus should have to worry about how they’re going to make ends meet.”

Harris noted that although Maximus has a minimum wage of $15 per hour at its facilities, there are other federal workers with similar jobs who make as much as $29 per hour.

Some of Maximus’ Bogalusa employees held their strike at the company office, while others joined with members of the Communications Workers of America (CWA) at Touch of Class Auto Detailing, located at 701 S. Columbia St. in Bogalusa. Strikers said the location was chosen because of its visibility through the center of the city.

Emmanuel Varnado, a Maximus call center employee from Bogalusa, held a sign to show his frustration with the company.

“A lot of the new hires don’t even get paid time off when they get sick,” he said. “This is an important issue. It’s important to be visible and organize in a large group.”

Strikers waved their signs to motorists driving by along Columbia Street, and often received honks of approval. They chanted slogans, including “The people, united, cannot be divided.”

Maximus addressed some of the employees’ issues in a company statement released to The Daily News.

“As an example of our dedication to employees, we increased pay and compensation ahead of the finalization of the Federal Contractor Minimum Wage Act (Executive Order 13658),” the statement read. “Likewise, Maximus has improved health care benefits within the limitations of the funding levels made available under the terms of the Service Contract Agreement, under which we operate.

“Maximus has also pushed the modernization of the Service Contract Act, which was last updated in 1976 and constrains the wages and benefits that federal contractors offer. Maximus has been advocating for SCA improvements, such as allowing baseline health benefits to comply with the Affordable Care Act and adjusting wage rules so teleworkers can be paid prevailing wages based on where they live instead of where the business is located.

“We respect our employees’ legal right to attempt to organize, and any information we provide is designed to help them make an informed decision about union representation.”

The statement also noted that Maximus has focused its efforts on “three overarching goals to benefit our employees.” Those goals are improving business processes and the work environment, improving pay and compensation above the minimum wage, and reducing employees’ out-of-pocket health care expenses.

It is believed this is the first employee strike in Maximus’ history. The Bogalusa call center typically has between 600 and 700 employees on its payroll at a given time.