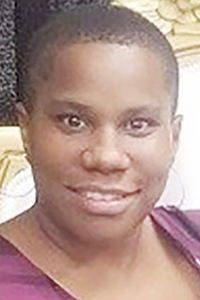 Turkisha grew up attending Franklinton Primary, Franklinton Elementary, Franklinton Jr. High, and Franklinton High School, graduating from the latter as a member of the Mighty Class of 2002. Turkisha was well-known for being the Queen of Petty — she could cut you with her words, but when she flashed that 1,000-watt smile, you could not help but to feel her love. Turkisha had a very distinct, funny personality; she would force a smile out of you if you were having a bad day. Turkisha was also a giver, a go-getter, and a fighter. If she felt that someone was in need, then she would do whatever she could to help out. If she felt that someone was being treated unfairly, then she would speak out against it.

From this untimely passing, she leaves behind a multitude of loving family and friends: her mother, Deborah Blackburn; her daughter, Aniyah Blackburn; two sisters, Cerissa (Chris) Burris and Tilesha Abron; one brother, Robert Abron; her maternal grandmother, Bernadine Cutrer Blackburn; and a host of aunts, uncles, nieces, nephews, cousins and special friends.

Turkisha was preceded in death by her father, Milton “Rat” Warren; her sister, Anastasia Blackburn; and a very special cousin, Jaston Conerly.

Drive through viewing will be Saturday, Feb. 19, from 4 p.m. until 6 p.m. at Crain and Sons Funeral Home in Franklinton.

Funeral services will be held on Sunday, Feb. 20, at 2:30 p.m., at Sweet Home Church of Christ Holiness, with Dr. John Wesley Jones officiating. Interment will be in the Sweet Home Cemetery.