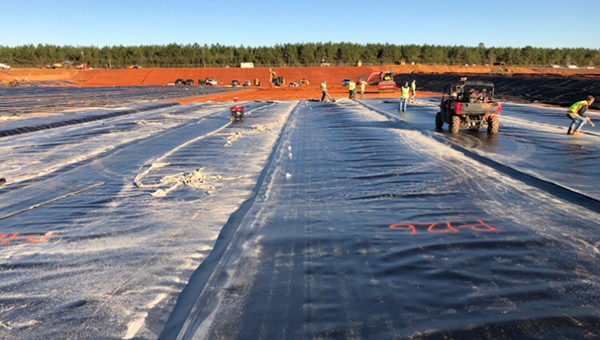 A protective liner is installed at one of the new cells under construction at the Choctaw Landfill in Washington Parish.

On Saturday, April 30, the voters of Bogalusa will decide the fate of a tax rededication attempt for a millage that has gone toward the disposal of residential garbage for Bogalusa residents for over 30 years.

Back in 1985, when the Choctaw Landfill partnership between the Washington Parish Government and the City of Bogalusa first was verbally agreed upon, the parish and three of the four municipalities in Washington Parish (Franklinton, Varnado, and Angie) decided to fund their portions with a perpetual sales tax. The City of Bogalusa decided to fund its portion with a 5-mill property tax that renewed every 10 years. Prior to this partnership, the City of Bogalusa had its own City Dump, but with the increasing environmental regulations at that time, the City decided to partner with the Parish and other local municipalities to create and operate Choctaw Landfill.

There has been a misunderstanding by many residents through the years — from all areas of the parish — about the difference between garbage pick-up and garbage disposal. The workers that pick up garbage are with privately owned businesses that are providing the service of collecting and hauling garbage to the landfill. These workers are in no way affiliated with the government-owned Choctaw Landfill — the only legal landfill in Washington Parish — where the garbage is disposed of in a sanitary manner consistent with modern environmental regulations. Also, Choctaw Landfill does not accept any garbage from outside of the parish, and to do otherwise would require a parish-wide vote.

In the agreement, the City was able to get out from under some debt that had plagued them for years, the Parish was able to meet the state law requirements eliminating any “gratuitous” nature toward another governing body, and the financial stability of the landfill (still publicly owned by the people of Washington Parish) was enhanced.

With this agreement, the City agreed to submit a portion of this millage to cover disposal costs for residential garbage and a portion to finish paying off the remainder debt to the Parish. This meant that all residents of Washington Parish — both inside and outside of Bogalusa City Limits — could still dispose of their garbage for no fee.

However, since the City no longer has an ownership interest in the landfill, City officials, under the advice of legal advisors, felt the tax language needed to change to state the disposal of garbage instead of the operation of the landfill. By changing the language, the tax could not legally be called a renewal. The tax failed in November of last year, with 429 in favor with 606 against.

In the Intergovernmental Agreement between the Parish and City, it states, “…Tonnage payments due shall begin accruing January 1, 2020 with invoices being issued monthly but payment for all calendar year invoices not being due and payable on or before March 31, of the year following, as long as the City funds the same by an ad valorem tax, otherwise, payments shall be due monthly.” This language was included to allow for the City’s collection of the tax, but also included a contingency in case the tax ever became unavailable.

In an interview, Bogalusa Mayor Wendy Perrette stated that without the millage, the City did not have it in the budget to cover garbage disposal costs. Since the State of Louisiana considers waste disposal to be “in the interest of health, safety, and welfare” of the residents, other vital City services would have to suffer more. The mayor indicated that simply adding this disposal cost to the fees already charged for garbage collection would be an impossibility, due to legal complications and state law.

It appears that other consequences of not having the disposal millage could be that residents living inside the city limits of Bogalusa would no longer be able to take garbage to Choctaw Landfill without being charged a tipping fee, and the litter epidemic that seems to plague our area may likely be exacerbated.

The “Determination of Emergency” in Section 1 of the City of Bogalusa resolution ordering the special election proposes as follows:

Shall the City of Bogalusa, State of Louisiana (the “City”), under the provisions of Article VI, Section 30 and 32 of the Constitution of the State of Louisiana of 1974, and other constitutional and statutory authority, levy and collect a special ad valorem tax of five (5) mills, on all property subject to taxation in the City (an estimated $421,650 reasonably expected at this time to be collected from the levy of the tax for one entire year), for a period of ten (10) years, beginning with the year 2022 and ending with the year 2031, inclusive, the proceeds of such tax to be used for paying the costs of garbage collection and disposal; such proposed tax replacing the 5.00 mills tax that expired after the 2021 levy, and which was used for constructing, acquiring , maintaining and/or operating landfill facilities, including the acquisition of land?”