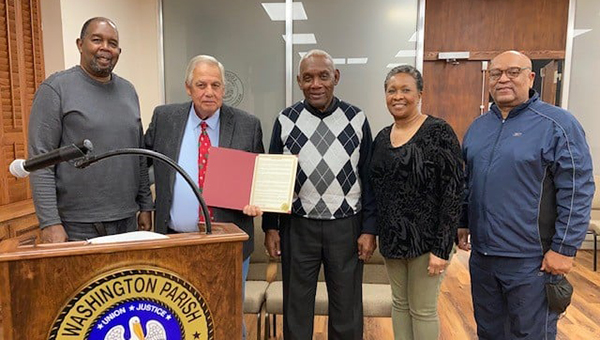 Gary Cooper Magee was presented a proclamation in his honor by President Richard Thomas at the Washington Parish Council’s Dec. 20, 2021, council meeting, for his 61 years of coaching, teaching, mentoring and leading members of the City of Bogalusa, the Town of Franklinton and the St. Tammany and Washington parishes.

The proclamation details his illustrious athletic ability from 1952-1958 and his coaching career from 1960 through 1994.

In addition, Coach Magee was honored at a special recognition on Saturday, Dec. 18, at the Bogalusa High School ROTC Auditorium. Several Washington Parish Council members were taught, coached and/or had Coach Magee as their principal. Many memories were of Coach Magee were spoken by the council.

Shown in the photo is Mr. Kenneth Dale McSwain (one of the originators of the special recognition), President Thomas, Coach Magee, Mrs. Chavela McSwain and Coach Ken Martin.