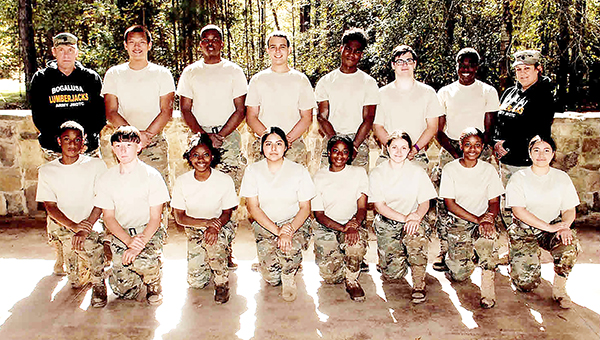 The Bogalusa High School Lumberjack Jr. ROTC Raider Team was given the opportunity to attend the Raider Nationals in November, at Gerald Lawhorn Boy Scout Camp in Molena, Ga.

This event consisted of a physical team test. This test included a trek over a distance under a half-mile total, using a variety of physical obstacles weighing from 60 to 180 pounds; an 85-foot rope bridge over a small section of water in the Flint River; a cross-country rescue course roughly one mile in length through wooded terrain with obstacles, 35-pound rucksacks and a 90-pound litter; and the Raider Gauntlet, a one-mile event through fairly level ground with numerous obstacles to include an eight-foot wall, and a solid strategy to overcome. The last event was a 5K mountain team run.

Cadets Ji’ryn Moses and Ra’navia Mccray were nominated to represent Bogalusa High School in the “Ultimate Raider Competition.” This was strictly an individual event among the most elite individual cadets attending Raider Nationals. This also gives the future raiders a motivation to push themselves to their full potential so they can return and represent Bogalusa once again.