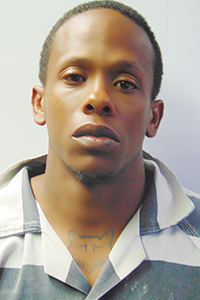 On Friday, a Washington Parish Sheriff’s Office patrol deputy responded to a report of an intruder on property located on Highway 438, according to WPSO Chief Criminal Deputy Mike Haley.

On his arrival at the scene, the deputy encountered Joshua Edward Foxworth, 35, a resident of Bene Street in Franklinton. As the deputy attempted to handcuff him, Foxworth actively resisted and fled on foot, Haley said.

“After a foot pursuit of approximately 200 yards, another deputy arrived and joined the chase,” Haley said. “The second deputy was able to overtake Foxworth, who actively fought. A third deputy arrived on the scene and was able to assist in subduing the resistant Foxworth.

“During an interview with deputies, the property owner reported that Foxworth talked nonsensically when confronted and asked to leave the property. He asked for the keys to the property owner’s car, which he had tried to enter, and began to walk away only after learning that deputies were headed to the location.”

Foxworth was booked into the Washington Parish Jail charged with five counts of resisting a law enforcement officer with force or violence, theft of a motor vehicle, criminal trespass, criminal damage to property and failure to appear in court. His bond was set at $30,000.

Haley said that Foxworth has been in the Washington Parish jail 24 times, beginning with a 2006 arrest for burglary and attempted criminal damage to property. Future arrests over the years were for similar charges in addition to domestic violence, possession with intent to distribute illegal drugs, three separate counts of driving while intoxicated, trespass, battery of the infirmed, hit and run, disturbing the peace, three separate counts of assault, several counts of resisting an officer and several counts of failure to appear in court. All total, he has been charged over the years with more than 70 criminal offenses, Haley said.

“It seems Mr. Foxworth has some behavioral issues that have not been addressed,” Washington Parish Sheriff Randy Seal said. “I’m pleased that no one was injured during this incident and that Mr. Foxworth was safely detained. I hope he can get the help he obviously needs, before someone is hurt.”