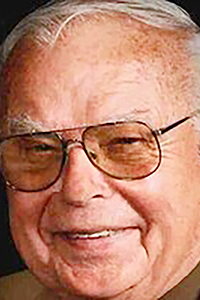 Floyd Ray Burdeaux passed away peacefully at his home and went to be with our Lord on Nov. 3, 2021, at the age of 88 from a suspected heart attack. Floyd worked hard at many different jobs, including three paper routes while still in high school and many years in outside sales at Central Electric. In 1967, he opened his own business, a Mobil gas station, on Pleasant Hill, and later added used car sales. In 1977, he moved to Alabama Avenue and added lawn mowers and motorcycle sales to his gas station and used car business. Later, he franchised and added auto parts to become Burdeaux Auto Parts and continued Burdeaux Used Cars with his son. After his building burned in 2014, when he was 80, he was not ready to retire. He rebuilt, opened and operated, along with his daughter, Burdeaux Auto Paint and Supply. He

was so proud of his business sense and ability to adapt to changing times to stay in business in Bogalusa for over 50 years.

Floyd enjoyed sharing his bass voice in praise of our Saviour, whether it was in the church choir, a gospel quartet, as music director at church, solo-specials at church, or singing with a group to the residents at Rest Haven Nursing Home.

He loved to tell a joke to anyone who would listen, and he was also quick to share stories of his life adventures. Floyd earned his pilot’s license, loved to fly, and owned several different planes over the years. He, along with Buck Jordan, Gussy Warner and Larry Ward, formed the T-Birds Flying Club. He often told his “near miss” stories and loved to talk of his Civil Air Patrol days. He loved his joint-tutorship training teenagers about the Air Force and flying in the Civil Air Patrol. His last literal flight was a gift from his children to fly a World War II Stearman bi-plane. On Wednesday evening, he made his final flight home to be with his Saviour and rest in the arms of Jesus. He was a member of Lee’s Creek Baptist Church.

Visitation will be held at Poole-Ritchie Funeral Home in Bogalusa on Tuesday, Nov. 9, from 10 a.m. until 2 p.m., when funeral services will begin. Interment will follow at Mt. Pleasant Baptist Church Cemetery.