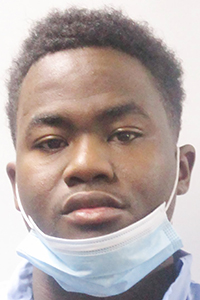 On Wednesday, a Washington Parish Sheriff’s Office jail deputy was assaulted by an inmate who has a history of assaulting law enforcement officers, according to WPSO Chief Criminal Deputy Mike Haley.

“While attempting to intervene in a situation involving several inmates, a jail deputy was physically assaulted by inmate Eddie Anthony Jackson, 21, who first pushed the deputy and then struck him multiple times in the head and face with a closed fist,” Haley said. “Eventually, the deputy was able to restrain Jackson and escort him to a secure holding area. The entire incident was captured on the jail camera surveillance system and reviewed by a supervisor who obtained an arrest warrant for Jackson’s arrest on the assault charges.”

Haley said that the deputy received a laceration and other injuries. He was evaluated by Northshore EMS and then transported to Riverside Medical Center for treatment.

Haley said that Jackson’s current stay in the Washington Parish Jail is his fourth since June of 2018, when he was arrested for theft of a firearm and burglary. In July of 2018, he was arrested again on charges of arson, aggravated battery, theft and probation violation.

He was arrested again in April of this year for aggravated assault with a firearm, being a convicted felon in possession of a firearm, battery on a police officer with injury, resisting a police officer with force or violence, aggravated battery and simple escape. In addition, the Louisiana Division of Probation and Parole placed a hold on his release. Bond for Jackson was set at $157,500. He now faces additional charges for assault with injury on the corrections deputy.

“This is the second time this week one of our officers has been assaulted,” Washington Parish Sheriff Randy Seal said. “Each time, thankfully, our officers were able to subdue their assailants. Young Mr. Jackson has a despicable record of violence, which is absolutely unacceptable in a civilized society. He is slowly but surely earning a place in a state penitentiary. His prison sentence will be well-deserved.”