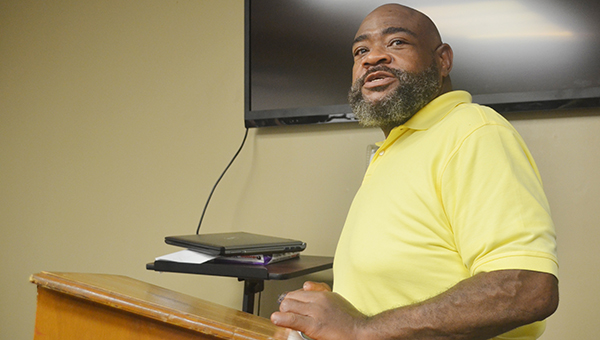 The Rev. Marvin Austin Jr. told the city council that he believes more outside agencies need to be involved in fighting the problem of local violence.

A recent scourge of shootings and other violent crime proved to be the primary subject discussed at Tuesday’s meeting of the Bogalusa City Council.

The Rev. Marvin Austin Jr. was given eight minutes to discuss the subject, as an approved speaker on the agenda. In addition to Austin’s presentation, four other citizens also expressed their concerns during the meeting’s public participation time — they were each given four minutes.

Tuesday’s meeting was held in the “war room” of Bogalusa City Hall, rather than the larger courtroom chambers where the meetings are typically held. The location was changed because the courtroom has a leaky roof, and that roof proved to be an effective metaphor for Austin’s remarks.

“If you don’t fix a small problem right then, it grows,” he said, comparing the problem of violence to the leak. “We need outside help. I don’t care if you have to call the (U.S.) Marshals or the FBI. We need help.”

Debbie McCloud spoke during public participation and she said that the city should do a better job of letting the public know about violent crime — regardless of where it occurs.

“We can’t be ‘in this together’ without everybody knowing what’s going on,” she said.

McCloud also said that blaming outside influences such as “bad parenting” is just a lazy way to ignore larger issues.

“I want to hear that a committee has been formed to find science-based solutions to the problem,” she said.

The Rev. Christopher Matthews showed visible frustration when he spoke, noting that the problems Bogalusa faces remind him too much of when he was living in the larger city of Dallas, Texas.

“We’re too small for something to happen like this,” he said. “Whenever it gets to the point that you’re not safe in your communities, we’ve got a problem.”

Perhaps one of the most compelling speakers was Tyrin Truong, a teacher at Central Elementary School. Truong said that he has personally heard how scared some of his students are.

“I’m in the classroom with these kids every day,” he said. “I know what they’re going through.

In other business, the council: