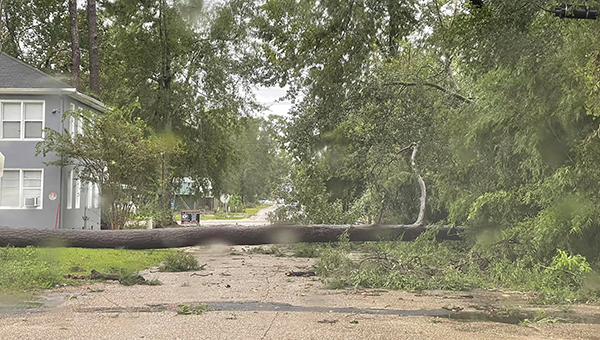 A tree lays completely across Richmond Street earlier this week, in the aftermath of Hurricane Ida. Most trees in the cities of Bogalusa and Franklinton had been removed by Tuesday, but hundreds of citizens still remained without power. (Courtesy photo by Karen Ramsey Fontenot)

Hurricane Ida came through Washington Parish this past weekend, and although the parish fared arguably better than other parts of the state, the storm definitely still had a local impact.

Thousands of parish citizens lost power during the storm, and many were still without electricity as of Tuesday’s afternoon press time. Entergy officials met with City of Bogalusa staff on Tuesday morning, and told the city that there were still 4,510 Entergy customers in the parish without power at that time.

Entergy officials said they could not estimate when power might be fully restored — it could be as soon as Wednesday or as long as two weeks.

Downed power lines can be reported at 1-800-ENTERGY.

The heavy winds and rain caused a number of trees to collapse across roads and structures, but no major injuries were reported. As of Tuesday morning, Franklinton Police Department officials said that most of the major road blockages in that city had already been removed.

The aftermath of Hurricane Ida resulted in a number of closures and postponements.

Most local schools announced that they would remain closed until Tuesday, Sept. 7, after returning from the Labor Day holiday. Among those schools were the Bogalusa City Schools, Washington Parish Schools, Annunciation Catholic School and Ben’s Ford Christian School. A post on the Bowling Green School website simply said that BGS “will remain closed until further notice.”

Ida made landfall early Sunday afternoon in Port Fourchon, with winds of up to 155 mph.

“I am extremely grateful to Pres. Biden for his swift response to my request,” Edwards said Sunday. “This will be critical to our response to the recovery from Hurricane Ida which has proven to be as dangerous as we anticipated. Tonight, we have confirmed at least one death and sadly, we know there will be others.

“Thousands of our people are without power and there is untold damage to property across the impacted parishes. FEMA has been with us since before the storm to help coordinate our state and federal efforts, which has been incredibly helpful. I know that it will take some time to address all of the challenges of this storm, but I am confident in the resilience of our people and the commitment of all of our partners to pull through this, which we will do together.”

All 64 Louisiana parishes were approved for Public Assistance Category B (emergency protective measures), including direct federal assistance, at 75 percent federal funding. In addition, for a period of 30 days from the start of the incident period FEMA is authorized to provide federal funding for Category A and Category B at 100 percent of eligible costs.

On Friday, Biden approved the governor’s request for a Federal Declaration of Emergency, prior to the storm making landfall. The Major Disaster Declaration will open up additional assistance to the state.