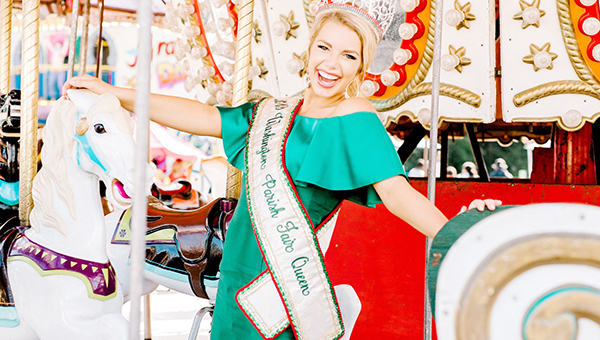 Shown above is current Washington Parish Fair Queen Abby Stogner, who was crowned in 2019. Stogner will ride in this year’s parade as fair queen, and the new queen will be named later that night.

The Washington Parish Fair Queen pageant is returning to its original Wednesday night spot at the main stage. The pageant will be Wednesday, Oct. 20.

The official Queen’s Pageant that fairgoers know and love today originated in 1978 when Tammy Reeves was crowned on Wednesday evening, the opening day of the fair. In 2003, the stage committee, executive board and queen committee moved the pageant to Tuesday evening immediately following the opening ceremonies. Colby Pitzer Jenkins was crowned queen that year and verifies, “Nikki Welsh, the 2002 queen, and I both rode in the fair parade on Wednesday morning that year; Nikki was outgoing queen and I was newly crowned.”

The Tuesday night event became very popular and was considered by many as a nice way to kick off the fair, even though the new queen had to scramble to be ready for the parade held less than 12 hours after the pageant. Unlike other fairs and festivals in Louisiana that are traditionally held on weekends, the Fair Queen’s “rhinestone sisters” gained from a year of travel and appearances were often unable to attend the event held on a weeknight as many had high school or college classes to attend. Therefore, in 2019 the queen committee sought permission to move the pageant to Saturday. This was intended to enable the new queen a year to travel and be an ambassador for the fair and host visiting queens on the Saturday who could actually enjoy a day experiencing the uniqueness of the fair and the many activities it has to offer.

The 2018-19 queen Claire Ingram did an outstanding job hosting visiting queens prior to the pageant on Saturday afternoon and became the first queen to reign over two fairs as the transition took place. In 2019, Abby Stogner became the first queen to be crowned on Saturday afternoon as well as the only queen in the pageant’s history to remain queen a second year. Stogner experienced one night and day as fair queen in 2019 before the COVID-19 pandemic cancelled nearly all events for 2020, essentially canceling her year of participating in other events and crowning a 2020-21 queen. The last event Stogner attended officially representing the fair was the Amite Oyster Festival in March of 2020. Since that time she has been able to attend other events but missed out on high points in 2020 such as the MCCA parade, the Bogalusa Fourth of July parade, fairs and festivals across the state and the traditional Washington Parish Fair parade.

According to fair president Cole Ladner, the 2019 pageant was a trial run for the new format. After much discussion and input from the committees involved, it has been decided that the pageant will return to its original Wednesday evening time slot and the newly crowned queen will reign throughout the fair week and ride in the parade the next year as the outgoing queen.

The Queen Committee is working on a plan for visiting queens. The annual Queen’s Tea is scheduled for Sunday, Oct. 17, at the Money Hill Clubhouse. All Washington Parish ladies between the ages of 17 and 22 are invited to attend. There will also be an informational meeting on Sunday, Aug. 29, at the Varnado Store Museum Annex at 4 p.m.

Meanwhile, the executive board and committee chairs have been impressed with Stogner’s ability to remain a positive ambassador for the fair despite the circumstances of her reign.

Stogner invites everyone to the Fair Queen Pageant on the evening of Wednesday, Oct. 20.

This article was written by Toni Tageant, who is a member of the Washington Parish Fair Association.