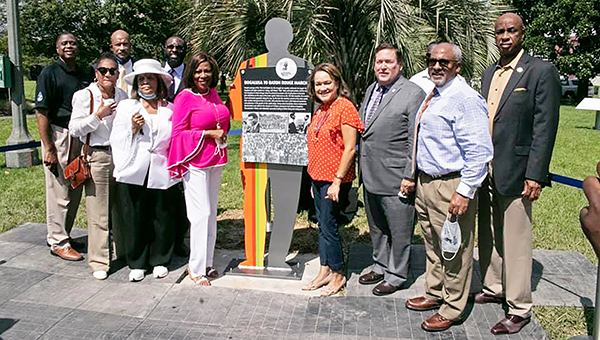 On Monday, Lt. Gov. Billy Nungesser and the Louisiana Office of Tourism dedicated a historic marker commemorating the civil rights march from Bogalusa to Baton Rouge in August of 1967, in a park named for one of the march’s Bogalusan organizers.

The marker, the fourth on the Louisiana Civil Rights Trail, was officially unveiled and dedicated at A.Z. Young Park in Baton Rouge. The march began roughly 54 years ago, on Aug. 10, 1967, when a group of civil rights activists and other citizens marched 105 miles on foot from Bogalusa to the Louisiana state capital. It is believed that the march increased in size from 25 participants at the beginning to more than 600, upon reaching Baton Rouge.

Hicks’ daughter, Barbara Hicks-Collins, was present at Monday’s unveiling ceremony. She was a recent high school graduate and a freshman at Dillard University when she participated in the march 54 years ago.

“We’re all very grateful and appreciative that the lieutenant governor and his staff got together to make this happen,” Hicks-Collins said. “It’s wonderful to know that this is a permanent marker, and it will be there for future generations. They’ll be able to ask, ‘What did they (the marchers) do? Why did they do it?’ And we can say, ‘We did it for you, for the generations that will follow us.’”

Bogalusa Mayor Wendy Perrette attended the ceremony and made some remarks, along with Baton Rouge Mayor-President Sharon Weston Broome.

“The lieutenant governor has taken the time and the opportunity to help us remember our history, so we don’t repeat ourselves,” Perrette said. “As we move forward as a society, I think it’s important to have these reminders. It puts Bogalusa on the state map and national map, because we were a part of such an important event.”

The ceremony even attracted coverage from major national outlets like CNN.

Nungesser unveiled the first three markers on the Louisiana Civil Rights Trail earlier this year, in New Orleans, Baton Rouge and Shreveport. The trail will eventually have 16 markers.

“I’m honored to dedicate this marker on the anniversary of the march,” Nungesser said Monday. “It took courage and determination to make it from Bogalusa to Baton Rouge, and we are proud to recognize this historic event on the Louisiana Civil Rights Trail as we share with visitors the impacts that our residents had on a national level in the civil rights movement.”