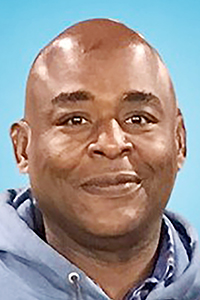 Keybian was baptized at Mt. Zion Missionary Baptist Church at an early age, under the leadership of the late Rev. Dr. A.S. Nelson. He was a member of the youth choir and the Mt. Zion Drill Team.

Keybian was a graduate of the Varnado High School class of 1994. He also attended Sidney N. Collier Technical College in New Orleans, Louisiana.

Keybian was known as a skilled mechanic. In addition to his mechanical skills, he was versatile in his ability to complete many tasks using his hands, such as carpentry and landscaping. He loved taking things apart and putting them back together again just to see how it operated.

“Jerrod,” or “Fat Cat,” as his family and friends affectionately referred to him, was a devoted father and grandfather who would give his last just to see those grandkids smile. Keybian lit up any room with that big smile and infectious laugh. He definitely lived life on his terms, but he did so selflessly. “Fat Cat” had a special relationship with everyone he encountered with his genuine persona and heart of gold.

The service will be at Kingdom of God Church (Apostle Kendon Grant Sr.), located at 814 Union Ave. in Bogalusa, on Saturday, June 26, at 1 p.m.

Cook-Richmond is in charge of arrangements. You may sign our guestbook at www.cookrichmondfuneralhome.com.