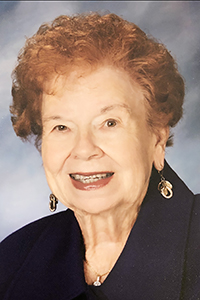 A lifelong resident of Bogalusa, Yvonne Grace Malley Griffith went to heaven May 24, 2021. She was 93 years old. Yvonne was born Nov. 13, 1927 in Bogalusa, to Joseph and Norma Malley.

Yvonne graduated from Bogalusa High School. She received a B.A. and M.Ed. from Southeastern Louisiana College. A dedicated educator, Yvonne served the Bogalusa City School System as a teacher and supervisor for 41 years.

An active member of the Louisiana Teachers Association, she served as president for many years, and she also served on many state and national educational committees. In addition, she was a member and officer of both Kappa Kappa Iota and Delta Kappa Gamma, education sororities.

Yvonne was a longtime member of the First Baptist Church, where she served in many capacities and membership on church committees and as a Sunday School Teacher. Her civic work included membership in the Bogalusa Civic League, Alphega Literary Society and Ingleside Literary Symposium. Yvonne did outstanding work for historic Bogalusa celebrations and the Bogalusa Dogwood Tours.

Visitation will be held at Brown-McGehee Funeral Home in Bogalusa on Sunday, May 30, from 11 a.m. to 3 p.m., with burial following at Ponemah Cemetery in Bogalusa. Pallbearers will be Alan Donald, Dr. Michael Donald, Gervais Sharp and Cole Sharp.