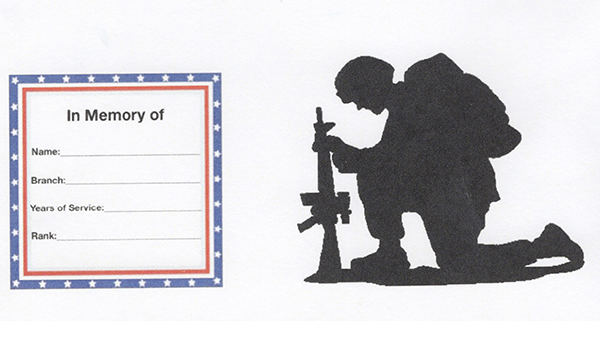 Each silhouette grave marker (RIGHT) will also include a personalized description including the veteran’s name, branch, years of service and rank.

Memorial Day was established as part of America’s culture by an act of Congress, out of respect for and in memory of our members of our armed forces who died in defense of our country.

Ever since a group of Bogalusans, mostly fresh home from France, assembled at the Pine Tree Inn in September of 1919, and formed Magic City Post 24 of the American Legion, our local post has encouraged our community to observe this hallowed day. This year’s program will be presented on Monday, May 31, at 4 p.m., at the veterans’ plot in Ponemah Cemetery, and, as is fitting, with both the very young and the elderly showing their allegiance in song and prose. Claire Kellar, age 22, will lead in the rendition of the national anthem. The Rev. Larry Lassley will provide inspiring music, and Annunciation Catholic School’s Beta Club members, together with Bogalusa High School’s Jr. ROTC, will place the traditional poppies on the veterans’ graves.

A picturesque silhouette for each grave will be provided by the Legion, and will be positioned by prominent community leaders, including Mayor Wendy Perrette and Peggy Huddleston, chaplain of the Oushola Chapter, Daughters of the American Revolution. As of this writing, there are 325 of those graves.

The silhouettes are not inexpensive, and Post 24’s funds are raised locally, through efforts of its members, and also with contributions. It will help greatly if friends will sponsor a silhouette honoring a family member, a friend, or the Unknown Soldier, or the armed services as a whole. These emblems are available at a price of $25 for those who wish to honor a military veteran in a family cemetery or any other place of rest.

“This year, we are placing slightly more emphasis on the music that inspired us, that stirred our spirits, and reminded us of our mission and of the folks at home and of what we owed them.

“The doughboys of 1917 and 1918 sang and marched to “Over There,” “Pack Up Your Troubles in Your Old Kit Bag,” and “It’s a Long Way to Tipperary,” and many of us who were too young to wear uniforms in the Second World War sang them at school and thought of them when we were picking up old plow points and window weights during the scrap iron drives, when our country was so desperately trying to replace the Pacific Fleet that had been lost on Dec. 7, 1941 (at Pearl Harbor).

“There are still those of us who once marched smartly to John Philip Sousa’s “Stars and Stripes Forever,” and who in precious moments of parting, drifted across a dance floor while saxophones and an accordion told us of Irving Berlin’s “White Christmas.” That music still hangs on in our members and, in those times of uncertainty, was part of our strength.

“Keeping those wandering thoughts in mind, we invite you to join us on Memorial Day, May 31, at 4 p.m., and to share with us that day’s brief interval of reverence, remembrance and thanks. Lest we forget … lest we forget.”