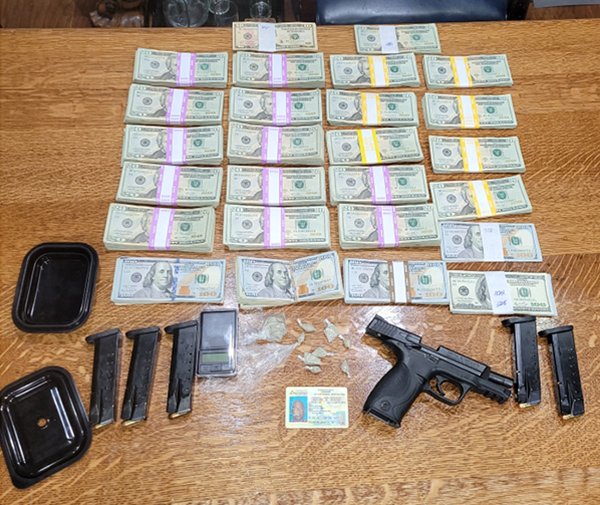 More than $240,000 in cash was recovered during the arrest. Some of the money, as well as confiscated weapons, is shown above.

The Washington Parish Sheriff’s Office Drug Task Force made a major drug arrest on Wednesday, after an investigation into illegal drug sales north of Franklinton, according to WPSO Chief Deputy Mike Haley.

Arrested on Wednesday was Keith Bell, 58, a resident of Old Columbia Road north of Franklinton. Bell was booked into the Washington Parish Jail, charged with possession of illegal drugs with the intent to distribute, being a convicted felon in possession of a firearm and an outstanding warrant issued by the Louisiana Department of Probation and Parole. 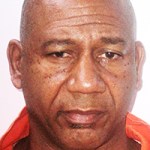 Haley said that more than 21 grams of heroin were seized during Bell’s arrest, along with a semi-automatic pistol and $241,515 in bundled cash.

Jail records indicate Bell has one previous arrest in Washington Parish, Haley said. In 2006, he was arrested and charged with possession with intent to distribute illegal drugs, two counts of battery on a police office and being a fugitive from the Louisiana Department of Probation and Parole. His bond currently is set at $150,000, but he is ineligible for bond release due to being on parole.

The investigation is continuing, and thus far has produced one additional arrest, Haley said. On Thursday, a Bell associate, Jessica Lynn Naquin, 38, a resident of Curve Road in Folsom, was arrested in conjunction with the ongoing investigation and booked into the Washington Parish Jail. She was charged with criminal conspiracy in conjunction with Bell’s arrest, and her bond is currently set at $75,750. 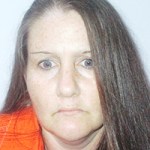 “This is one of the largest seizures ever in Washington Parish,” Washington Parish Sheriff Randy Seal said. “Our narcotics detectives worked hard on this case and are to be commended for their diligence in pursuing this drug dealer until enough evidence could be collected to make the arrest.

“This investigation continues and any other persons who might be connected with Mr. Bell’s illegal drug activities should consider turning themselves in. Our drug task force officers are not always visible to the public, but I assure you they work diligently, day and night, to identify and arrest drug dealers.”