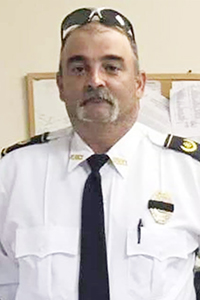 Michael Wayne Seal, 50, a resident of Angie, passed away early Sunday morning, Feb. 14, 2021, at St. Tammany Parish Hospital after a lengthy illness. Mike was the Assistant Chief of the Washington Parish Volunteer Fire Department District 5 in Angie. He proudly wore badge #502 and was honored to serve his community every day. He also proudly served his country in the U.S. Army. Mike worked for nearly 15 years in technical support for Marine Technologies in Mandeville. Mike loved hunting, fishing and the outdoors. He liked to cook and Bar-B-Que and enjoyed boiling crawfish each year with his family. Mike was a big fan of John Wayne and liked to watch old western TV shows and movies. He was a devoted husband, father, co-worker and friend. Mike will be dearly missed by all those that knew him.

He was preceded in death by his parents, Alvin Wayne Seal and Lynn Scardino Seal; grandparents, Talmadge and Pollie Seal, Joseph Jr. and Joyce Scardino; father-in-law, Paul L. Crockett; and other family members.

Visitation will be at Crain Funeral Home (1109 Bene St. in Franklinton) on Saturday, Feb. 20, from 9 a.m. until noon. A funeral service with Fireman’s Honors will be held in the funeral home chapel at noon Saturday, Feb. 20, with Chaplain A.J. O’Bryant officiating. Burial will follow in the Bonnie Cemetery in Angie.

In lieu of flowers, the family requests donations to help with final expenses.