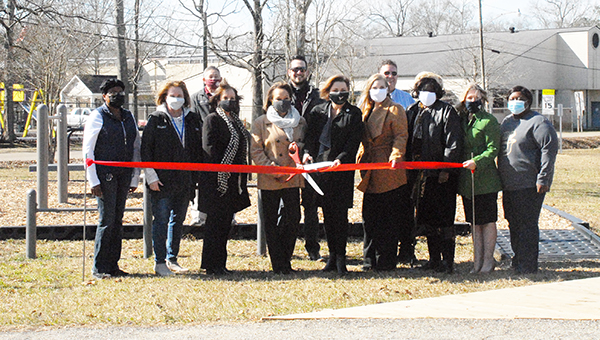 Goodyear Fitness Park held its grand opening Thursday morning. The park, which is located next to the YMCA, was originally called Goodyear Park. The park features workout equipment along with a covered area.

“The City of Bogalusa and our partners with Bogalusa Strong, we got a grant about a year ago through Well-Ahead (Louisiana) to purchase some outdoor fitness equipment,” said Landon Tims, director of parks and recreation for the city of Bogalusa. “With this fitness equipment, we are now nationally recognized as a fitness park. Today is the unofficial grand opening of the park and so we just decided to have a small ceremony with everybody here that are contributors, that have helped us along the way and that are just kind of a special part of what we’re building

“ We also built this new covered area and that is through a kind donation of the Northshore Community Foundation. We had an anonymous donor with that and so it’s just been great all around. This has been a huge goal of ours to have this outdoor fitness equipment for a long time and now that goal has finally been reached, so we’re pretty excited about it.

“Thank you to the council. We have changed the name of Goodyear Park to Goodyear Fitness Park and we look forward to making this a place where people can come and exercise and be healthy for many years to come.”