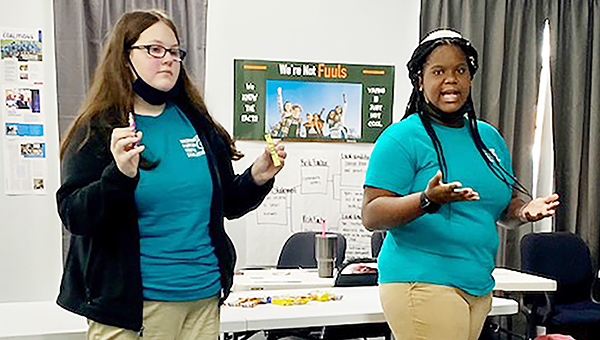 Franklinton High School students Gracie Thigpen and Shyanne Burris discuss various types of vapes that are being used by youth. The youths were guest speakers at the January meeting of the Washington Parish Coalition on Human Services.

They shared local data pertaining to opioids and marijuana use, as well as a detailed presentation on vaping. They noted that many uneducated choices are being made from the purchase of products — including possible addiction and the unknown long-term results.

Rhonda Gunnell, ADAPT/PFS director, reported that Prevention Connection/Partnership for Success meetings are held each month at 8:30 a.m., prior to the WPCHS meeting. The meetings are open to anyone who would like to join forces in reducing underage drinking and substance use by youth. She also reported on activities and events that took place in December.

Marty Hennegan, BFH/DHH, reported that Sudden Infant Death Syndrome (SIDS) cases have increased in the past three months. Anyone who needs safe bedding for a child under the age of six can contact her.

Regina Meyerchick, ADAPT/DFC director, announced that she and Fornea will be sharing a presentation at the CADCA National Forum Ideas Fair during the first week of February. The presentation will highlight accomplishments of WPCHS. Meyerchick stated that the youth coalition now has over 100 members.

Katasha August, Bogalusa High School Health Center, reported that BHS is providing drive through COVID-19 testing for students, staff and other school system employees on Monday through Friday from 9 a.m. until 11 a.m.

The next scheduled meeting for WPCHS will be on Tuesday, Feb. 23, at 9:30 a.m. at ADAPT, located at 216 Memphis St. in Bogalusa. Meetings are open to the public.