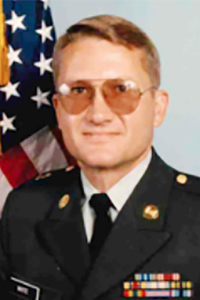 It is incredibly difficult to attempt to capture the impact of a person’s life in a few paragraphs, especially when that person lived the kind of life Jewell lived. Jewell lived by the motto “Love God, Love Family, and Love my Country.”

Jewell was born in Bogalusa to Julius Jewell White Jr. and Betty Branch White on Dec. 24, 1949. He graduated from Bogalusa High School in 1967, and he went on to attend Southeastern Louisiana University where he earned his bachelor’s degree in Business and Marketing in 1971. Jewell joined the Louisiana National Guard in 1971, and he worked as an occupational therapist at the Bogalusa Mental Health Center for six years. While Jewell loved being able to help others as an occupational therapist, he decided to serve his country in a full-time capacity in 1977. In 1987, Jewell graduated from the Sergeant Major’s Academy at Fort Bliss, Texas. He served as the Command Sergeant Major for the 205th Engineering Battalion and became the Commandant for the NCO Leadership Academy at Camp H.B. Cook in Ball, Louisiana. After leaving Camp H.B. Cook, Jewell was the Director of Recruiting and Retention for the Louisiana National Guard. Throughout his 34 years of service, Jewell received many recognitions and awards. However, what Jewell valued most was the brotherhood and friendship he found while serving his country. After retiring from the Louisiana National Guard, Jewell decided to share the love he had for the Louisiana National Guard with students. In 2005, Jewell joined the faculty at Pineville High School as the Senior Jr. ROTC Instructor. He absolutely loved teaching and mentoring Jr. ROTC students for 10 years.

Jewell was passionate about his family, LSU, and the outdoors. He was an avid outdoorsman. Growing up, he and his brother Roger loved to hunt and to watch LSU football. One of Jewell’s favorite things to do was to have friends over for an LSU football game. He was the best coach LSU never knew they had. Jewell loved spending time with his family, and he was especially proud of his new grandson, Jon-Marc.

Visitation will be held at Poole-Ritchie Funeral Home in Bogalusa from 1 p.m. to 2:30 p.m. on Sunday, Oct. 11, followed by services at 2:30 p.m. Jewell’s friend and pastor, Dr. Gary Baldwin, will officiate. Military rites will follow at Ponemah Cemetery in Bogalusa. Pallbearers and honorary pallbearers will be family and military family.

In lieu of flowers, donations can be made to First Baptist Church of Bogalusa or New Life Community Church of CENLA in Alexandria.