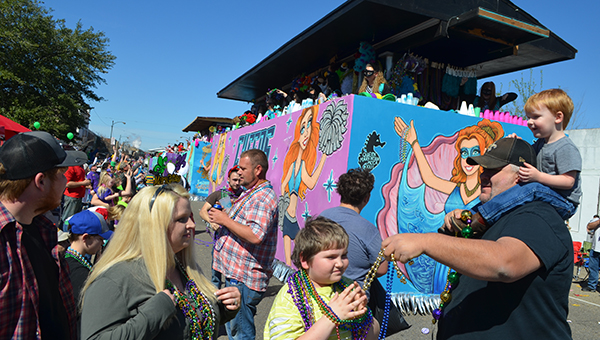 Don Spiers, captain of the Krewe of MCCA (Magic City Carnival Association), said Thursday that the board of directors has decided to cancel the celebration in February of 2021 — which would have been MCCA XLI (41).

All events associated with the Mardi Gras season in Bogalusa, including the annual Parade of MCCA, will not be held in 2021.

“The MCCA season is very complex when compared to a typical Mardi Gras production,” Spiers told The Daily News. “We begin our season with the nominations and staffing of the Royal Court members in September and October of each year. Then, they arrange for design and production of costuming and organization and are presented in early December in an announcements event at which the King and Queen are revealed.

“A multitude of about 40 ‘mini-balls’ are then arranged and presented by each float group, leading up to the presentation by the Krewe of the Coronation Ball presented the week prior to the annual parade. The venues for holding these events are now restricted from commitments, due to health and safety requirements presented by the coronavirus crisis.

“A great many floats are painted and re-designed to comply with an annual parade theme, and our members design and produce theme-depicting costumes commensurate with that chosen by their Den or float members group. It requires a great deal of time, expense, preparations and commitments.

“We do love presenting it all, we are very proud of our program in Washington Parish, and the MCCA Board of Directors is highly reluctant and distressed at this development.”